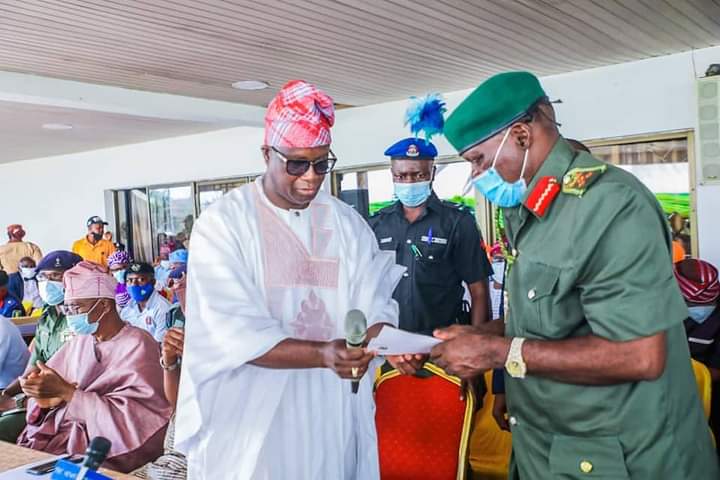 The leadership of the Osun Chapter of Nigerian Legion on Wednesday lauded the Administration of Governor Adegboyega Oyetola for creating an enabling environment for the members of the Legion to thrive.

They also commended the tremendous achievements recorded by the Administration in the last two years.

This is just as Governor Adegboyega Oyetola extolled the onerous roles and supreme sacrifice of the security agents to continually ensure peaceful coexistence, unity and togetherness in the country.

The Nigerian Legion spoke through its State Chairman, Comrade Oladimeji Olalere, at the launch of 2021 Armed Forces Remembrance Day Emblem held at the Government House, Osogbo.

Comrade Olalere said the Administration had done excellently well in all the sectors of the economy as manifested in the myriad infrastructure development springing up across the nooks and crannies of the state.

He described the two years of the Administration as most impactful not only to the members of the Legion but also to the generality of the citizens of the State.

“I will not hesitate to express our profound gratitude to the Government of Osun and other donors for sponsoring this event every year since the assumption of Governor Adegboye Oyetola as the governor of our dear State.

“We congratulate the Governor for the numerous achievements recorded as this had lifted our State high among her equals in the country,” he added.

In his remarks, the Governor of the State of Osun, Adegboye Oyetola applauded the nation’s security operatives in the country for standing firm to ensure adequate protection of the nation’s territorial integrity and collective security and safety of the citizenry.

He acknowledged the invaluable contributions of the Nigerian Armed Forces to nation building, particularly the avowed commitment to containing the activities of terrorists and bandits across the nation.

Oyetola, represented by his Deputy, Benedict Alabi, described Armed Forces Remembrance Day as a day that affords a unique opportunity to publicly salute the courage and extol the onerous roles of the outstanding patriots whose preoccupation is the protection of the territorial integrity of the nation; and the collective security and safety of the citizens

He added: “We say thank you for your role in containing the activities of terrorists and bandits in our nation, especially the North Eastern part of the country. We thank you for giving up your own comfort so that we all can sleep with our eyes closed.

“We thank you for fighting to safeguard our unity as a sovereign nation. We thank you for serving humanity with the outstanding roles you constantly play in global peacekeeping operations.

“We thank you for your unparalleled patriotism, which continues to set the pace for us to give our best in the service of our beloved nation. We will never forget.

“As an administration, we are grateful for your sustained commitment and support. We pledge to continually do all within our abilities to support causes as this and to work with you in our collective quest for the protection of lives and property.”