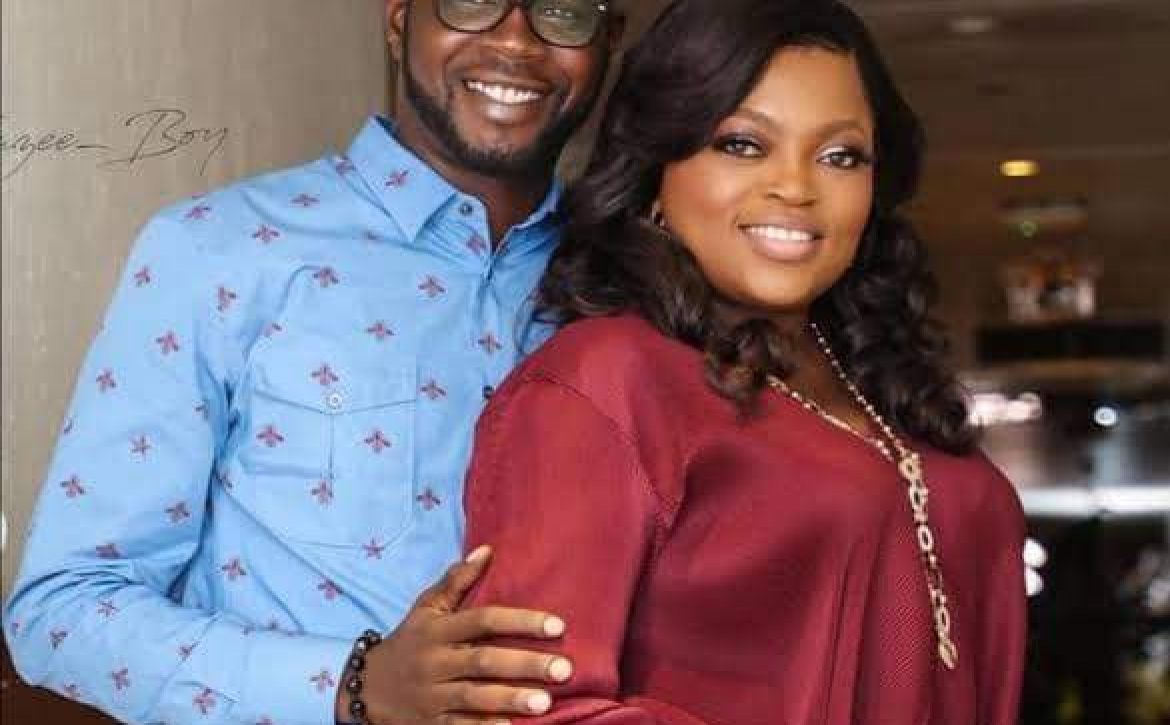 JJC Skillz took to his official instagram page to announce the separation from Funke Akindele. Read the statement Below:

Dear Friends and family I need to let you know
that Funke and I have separated. While it lasted we shared a lot of things together and have created 2 beautiful children. The last two years have been extremely difficult for us. I know I have tried my best to fix things but I believe it is beyond repair now.

3 months ago and at Funkes insistence I moved out of the house and apart from AMVCA have not been able to get Funke to sit down in an amicable manner to discuss the future of our relationship. I’m making this announcement so that the public is clear that we both are pursuing separate lives. We still have issues that need to be addressed such as the custody and wellbeing of our children which is paramount as well as business interests which need to be disentangled but I
have no doubt that these will be resolved one way or the other. 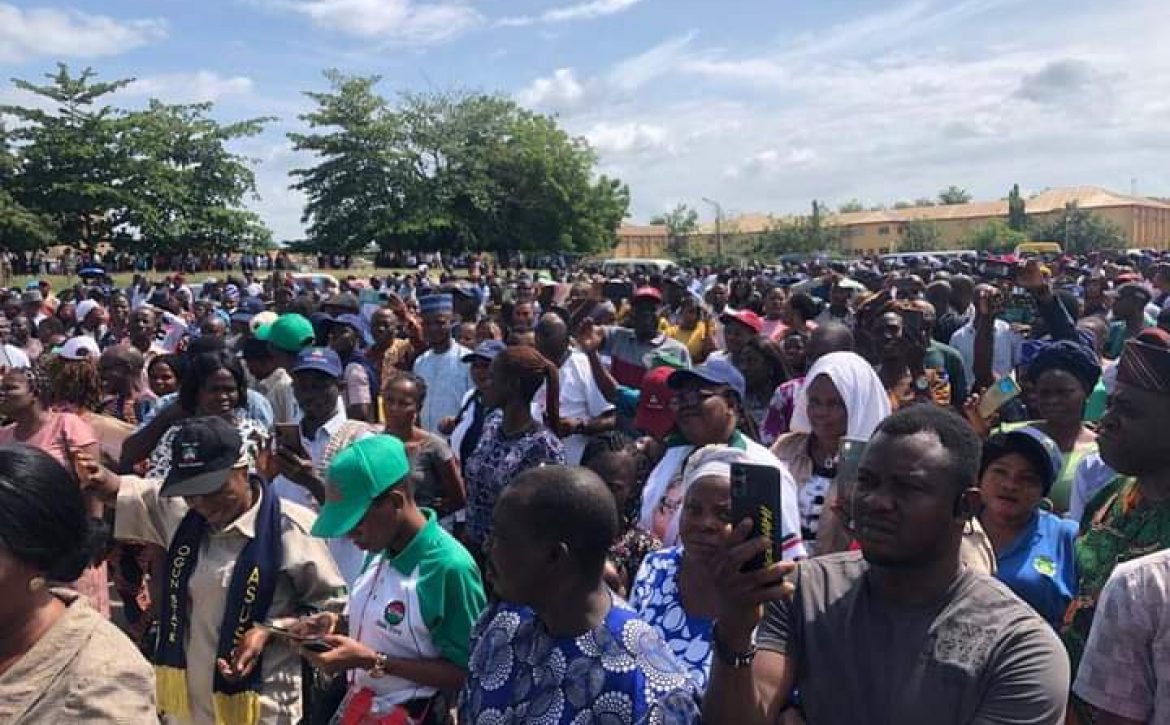 Ogun State Governor, Prince Dapo Abiodun, has invited Organised Labour in the State to a meeting, today, Wednesday to resolve the industrial action embarked upon by government workers.

The meeting is expected to discuss all issues contained in the list of grievances raised by the workers for embarking on the indefinite strike action.

A statement in Abeokuta on Tuesday by the Commissioner for Information and Strategy, Alhaji Abdulwaheed Odusile, said the Governor is taking personal charge of resolving the grouse of the workers as part of his personal and Administration’s commitment to the welfare and wellbeing of workers in Ogun State, which has been amply demonstrated since the inception of the Administration.

“I am personally committed to ensuring an improved welfare of workers in Ogun State and will do all that is necessary to achieve this”, the statement quoted the governor as saying, adding that: “this is a workers’ friendly Administration and will remain so under my watch”.

“One of the first duties I performed on my first day at work as the Governor on May 30, 2019 was to approve the immediate payment of salaries of our workers, which had not been paid by the immediate past Administration until then. I also made a vow that salaries of workers in the State will be paid on or before the end of each month. And we have been doing that religiously ever since.

“Even in the face of dwindling resources, rising needs and this strike, the salaries are being remitted. I am sure they will start receiving bank credit alerts in the next 24 hours for the month of June. We are one of the few States in the country not owing workers salary and paying as and when due”, the statement quoted the Governor as saying.

It further explained that the whatever issues being raised by the aggrieved workers would be expeditiously addressed.

“Most of their complaints were inherited from the previous Administrations, but as a responsive and responsible Government, we are tackling them one after the other, even as we are being hampered by paucity of funds.

“The money accruable to us from the Federation Account and sundry sources have been dwindling for a long time now and this is affecting our ability to meet some of our obligations but even at that we have been prioritising the interests of our workforce”, Governor Abiodun added.

He assured the workers that he would do everything within available means to address issues of concern to the workers, whilst urging them to show understanding with the Government and call off the strike. 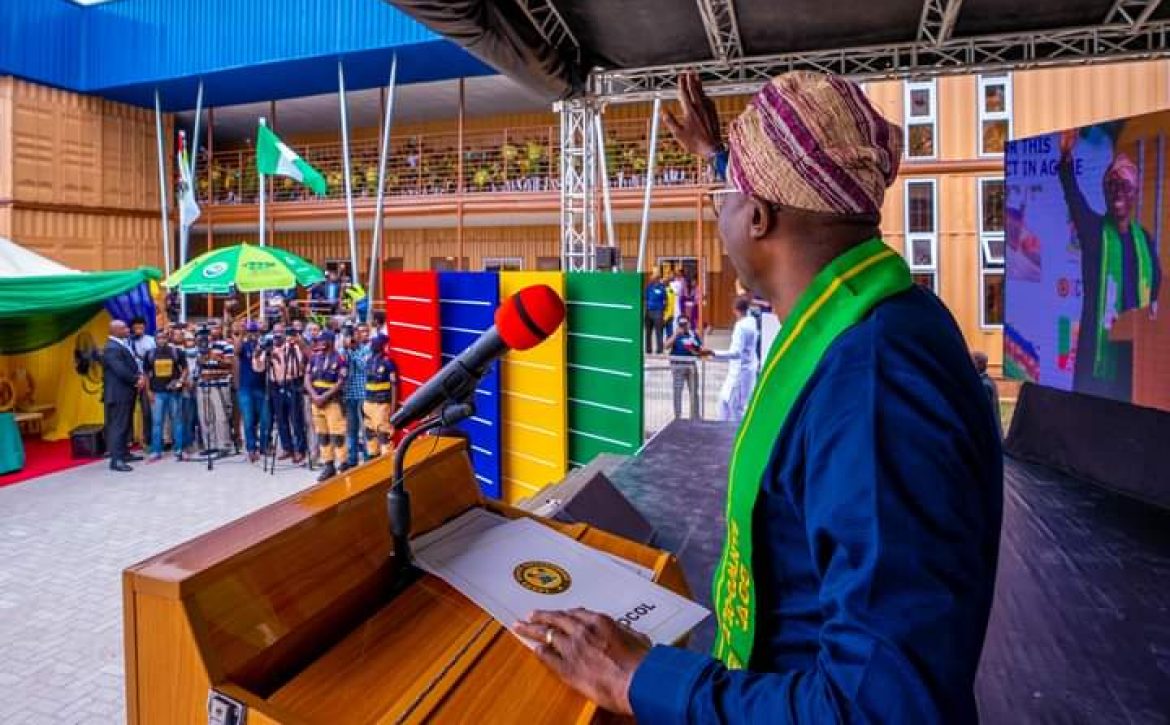 The Lagos State Governor, Babajide Sanwo-Olu has today commissioned interactive classroom blocks in one of the public schools in Lagos.

This was contained in a statement made available to newsmen as read in part:

“I also commissioned a modular, interactive classroom block at the Vetland Junior Grammar School, Agege. Yet another milestone intervention in our ongoing transformation of the education sector in Lagos State.

“This modular building is made up of nine regular classrooms, three laboratories and four staff rooms. All of these spaces are powered by solar panels, which means guaranteed power supply to enable teaching and learning under the most conducive conditions.

“All the classrooms are equipped with interactive touch-screens, and all the students have been given electronic tablets to aid both in-class and virtual learning.

“The school has also been provided with a basketball court, and a five aside football pitch to encourage their extra-curricular activities.

“So far, our administration has constructed more than 800 new classroom blocks in the public school system of Lagos State, while also completing the rehabilitation of about 200 public primary and secondary schools, with several others ongoing.

“Our goal is to build schools of the future, public schools that are driven by cutting-edge technology and that can compete favorably with the best schools anywhere in the world”. 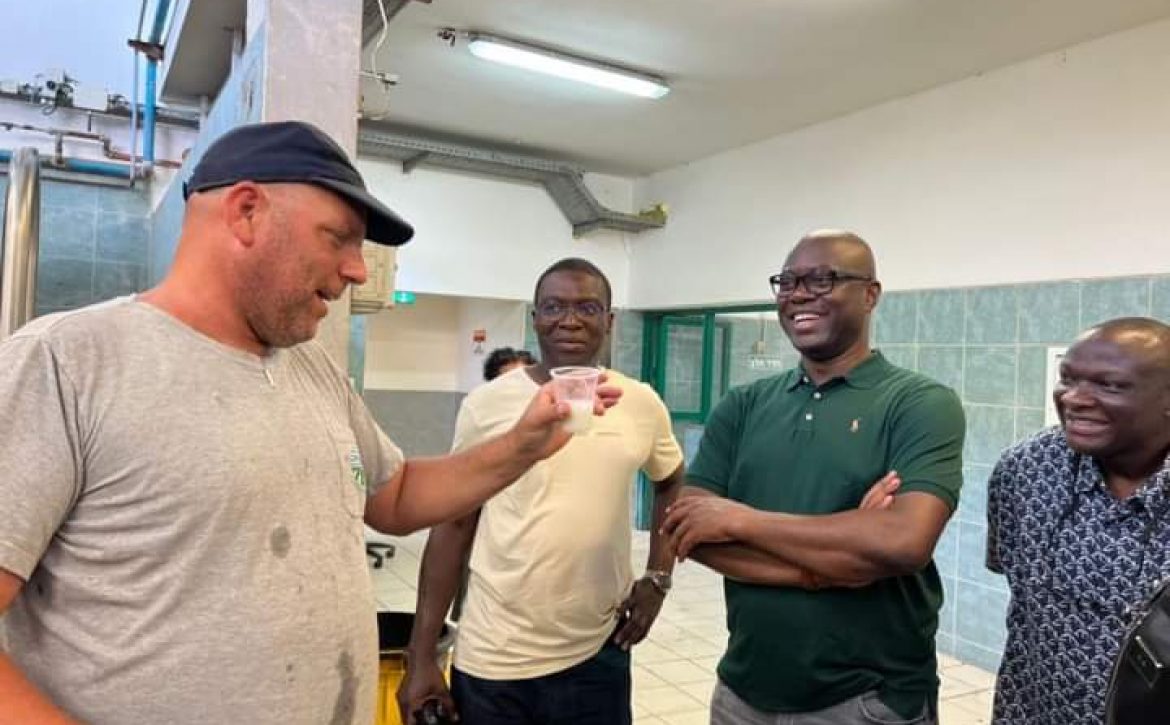 The Oyo State Governor, Engr. Seyi Makinde has today visited Israel to sign a pact on agribusiness policies and a partnership between Hebrew University of Jerusalem and LAUTECH.

This was contained in a statement released and made available by the Governor via his official Twitter account as read in apart:

“This afternoon, as part of our visit to Israel to meet investors and institutions that have shown interest in Oyo State’s agribusiness policies, we signed an agreement of cooperation with the Hebrew University of Jerusalem to develop an agribusiness knowledge economy.

“The partnership includes scholarship offers, knowledge transfer and exchange programs between the Hebrew University of Jerusalem and the Oyo State owned Ladoke Akintola University of Technology (LAUTECH).
We also met with Oyo State students at the university.

“During the course of our stay in Israel, we have visited 2 kibbutzes (farm settlements) – a dairy farm and another farm which produces lettuce and fish, to see agritech deployment in modern agribusinesses”. 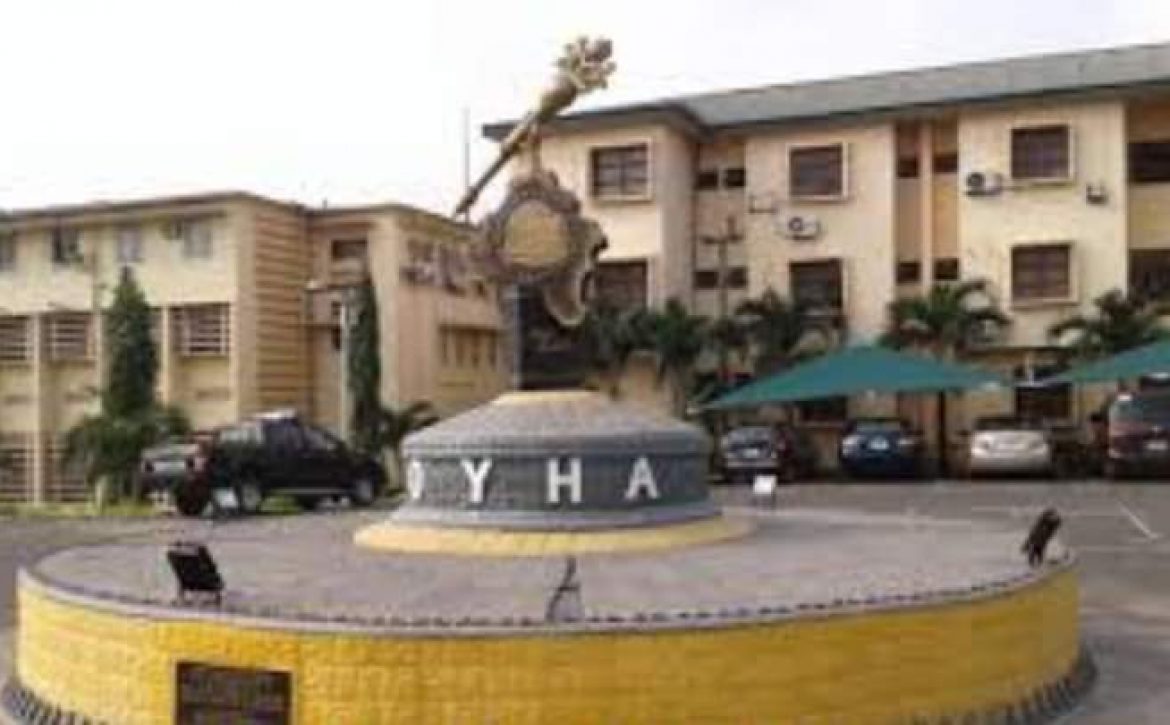 In the matter instituted at Oyo state High Court by the estranged Deputy Governor of Oyo state, His Excellency, Egnr Rauf Aderemi Olaniyan against the Oyo state House of Assembly, the court – presided by Justice Akintola A L, this morning, directs all parties to maintain status quo pending the determination of the motion in notice.

Parties to maintain status quo.
None of the parties must take any step in the matter. 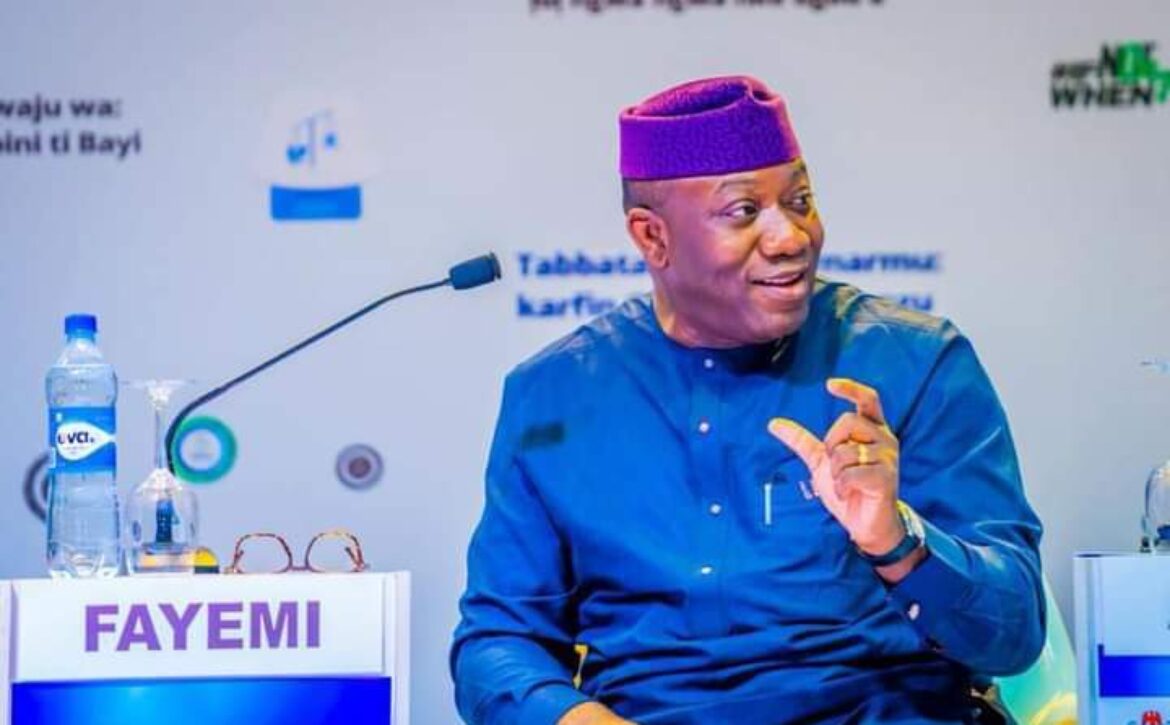 Ekiti State civil servants have given the state government 21 days within which to pay backlogs of their arrears or risk industrial action.

They said that non-payment of the entitlements had made life unbearable for them in the face of the present harsh economic realities.

The workers, under the aegis of Trade Union Congress, also bemoaned the incessant kidnappings in the state in recent times and charged the government and security agencies “to quickly rise to the challenge and nip it in the bud.”

In a communiqué signed by TUC State Chairman, Sola Adigun, and Secretary, Yomi Peters, at the end of its meeting, the body said Governor Kayode Fayemi promised to offset all arrears of payment before the expiration of his tenure in October, noting that he still had the opportunity of the next 21 days to redeem the promise.

Adigun and Peters listed their demands to include: remittance of already deducted dues such as co-operative deductions, contributory pension bank loans repayment, NHF fund, to the appropriate quarters.

They lamented that most members of TUC had not benefited from the new minimum wage after almost two years of implementation in the state, and called on the government “to implement the minimum wage across the board for all workers without further delay.”

While also noting that the 2018-2019 promotion exercise was selectively implemented, the union called on the government to ensure that others exempted should be immediately captured for financial remuneration.

The workers also frowned at the refusal of the Accountant-General of the state to continue with cooperative savings of Ekiti workers, due to the alleged presence of some syndicate operating in her office. 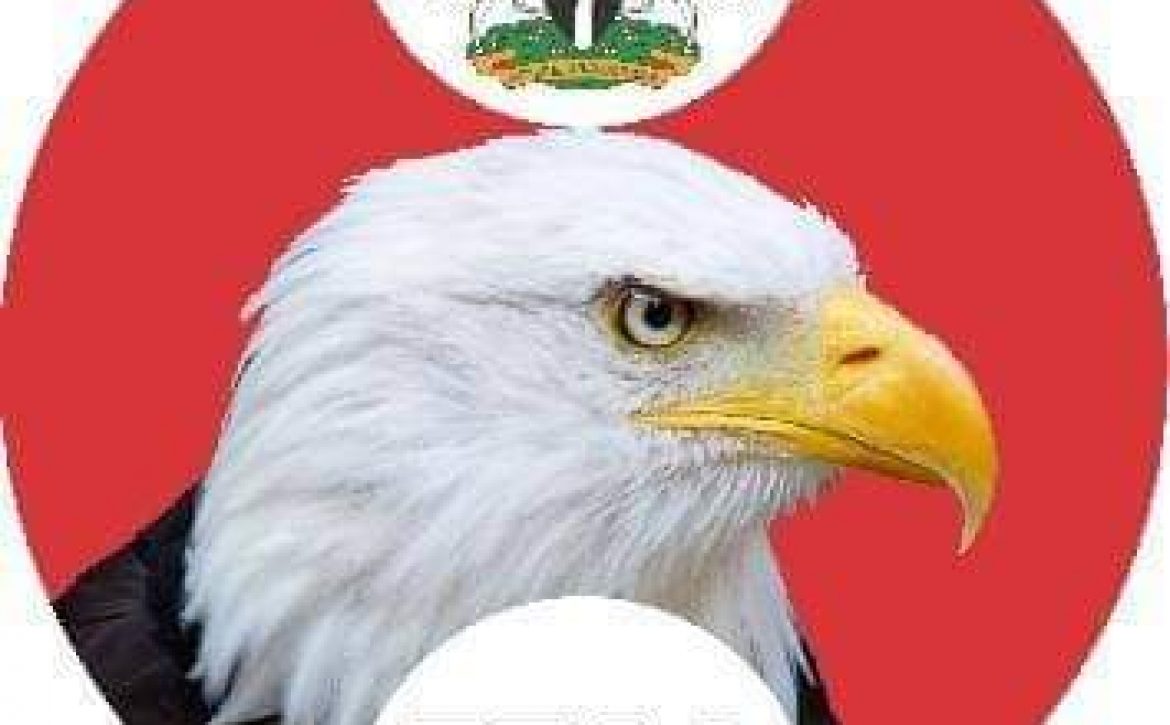 The Economic and Financial Crimes Commission, (EFCC) is set to start prosecuting landlords that rent out apartments to internet fraudsters commonly known as Yahoo Boys.

The EFCC stated that homeowners found guilty of housing Yahoo Boys would spend 15 years in prison.

The anti-graft agency made this known via its official Instagram page while calling on members of the public to attend a town hall meeting themed; “Landlord: Give Your House to Yahoo Boys, Spend 15 Years in Jail” to hold on June 29, 2022.

”The #EFCC is pleased to invite the general public to the tenth edition of #EFCCConnect an open forum with members of the public as we discuss, “Landlord: Give Your House to Yahoo Boys, Spend 15 Years in Jail”. 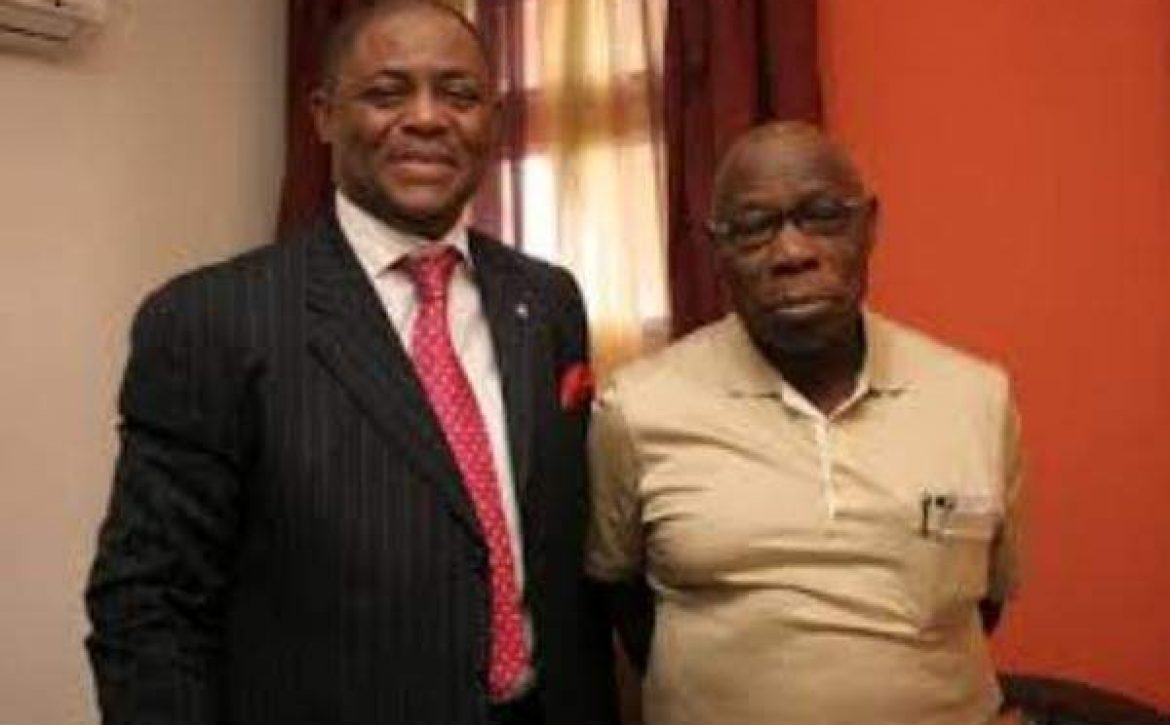 Former Aviation Minister, Femi Fani-Kayode, has lamented the inability of the present government to tackle the security challenges rocking the nation.

In a series of tweets on Tuesday night, the human rights lawyer recalled the administration of the former President, Olusegun Obasanjo which fought criminal elements and ensured peace in the country.

According to him, the days of good leadership are gone, stressing that, except, Nigerians, through hard work, establish better government in the 2023 general elections.

“Torturing and killing our people there would have been a price to pay. During the OBJ/Atiku Govt. Nigerians all over the world held their heads up in pride and knew that they had a President and Government that would not allow them to be pushed around or be intimidated.

“Sadly those days are gone and unless we work very hard and get the right leadership they may have gone forever”. 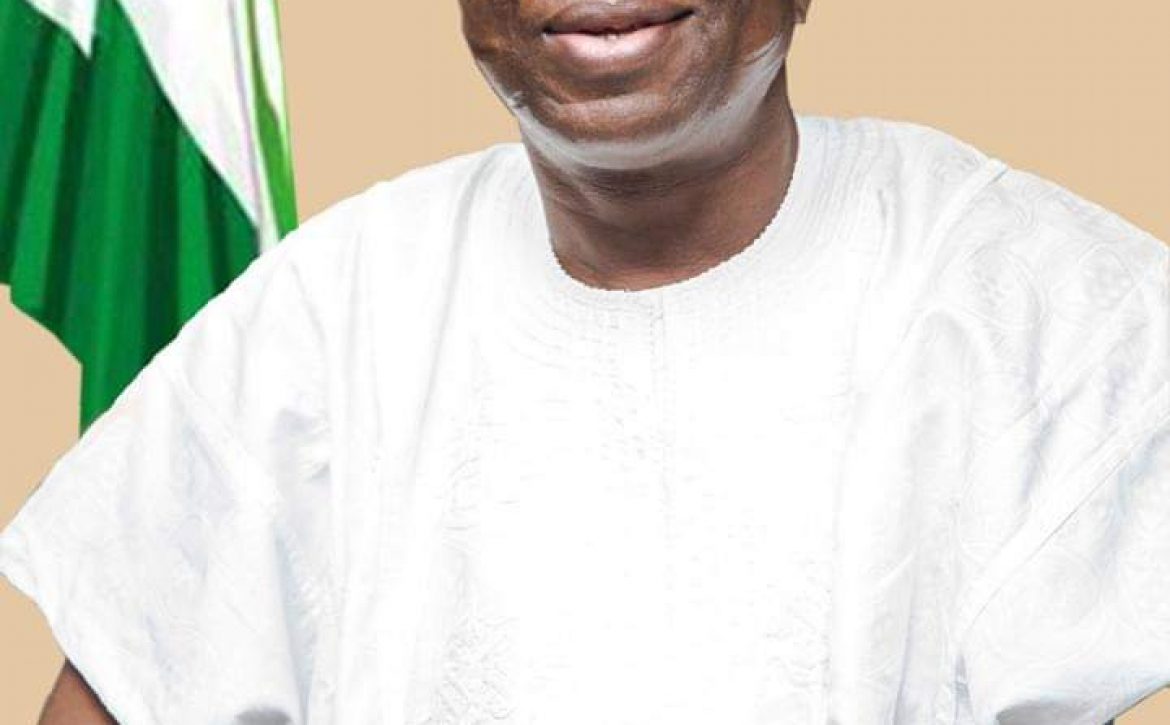 Engr Rauf Olaniyan, the Deputy Governor of Oyo State, has petitioned the state High Court to halt the impeachment procedure started by the State House of Assembly.

The deputy governor was accused of “severe misconduct, abuse of power, financial recklessness, abandonment of office, official duty, insubordination and other offences,” according to a petition signed by 24 of the State House of Assembly’s 32 members.

According to the petitioner, this procedure complies with the 2011 amendments to the Federal Republic of Nigeria’s Constitution. Article 188.

According to reliable sources, the Deputy Governor has addressed each accusation made in the petition by means of legal representation.

This development has been confirmed by the Chairman, House Committee on Information, Hon. Kazeem Olayanju.

Olayanju disclosed this in an interview session on an Ibadan-based popular radio station. He said the house has received the response of the deputy governor on the allegations levelled against him and it will be discussed when the House reconvenes on Wednesday today.

According to the Nigerian Tribune Newspaper, the development took another dimension on Tuesday when Olaniyan approached the court with prayers, seeking the order of the court to stop the House of Assembly from carrying on with the impeachment process.

The case came up before Justice Ladiran Akintola at High Court 7, Ring Road, Ibadan on Tuesday, and has been adjourned till Wednesday.

The Deputy Governor was represented in court by his legal counsel, Chief Afolabi Fashanu, SAN.

Adjourning the case, the court ordered that the Speaker of the House of Assembly, Adebo Ogundoyin, and the clerk be put on notice about the litigation. As gathered, the duo have been served the court processes on Tuesday afternoon.