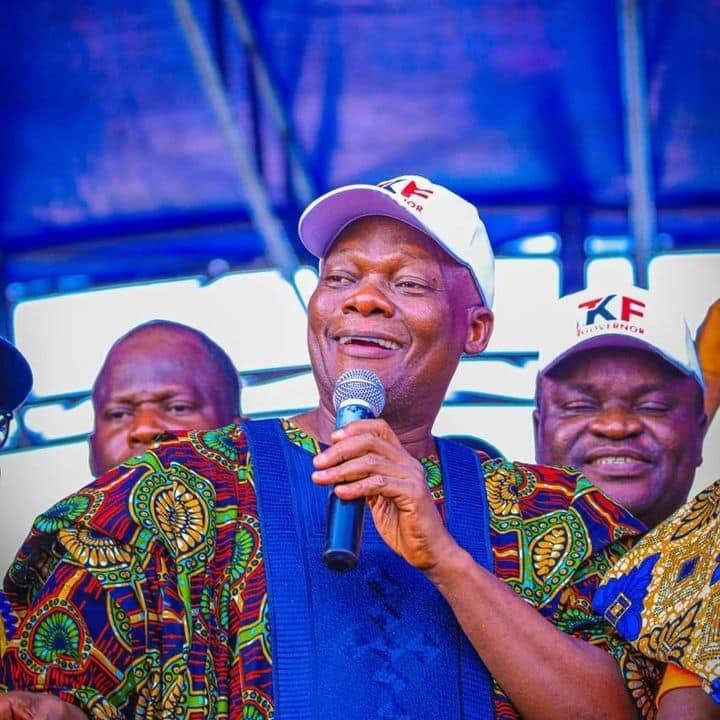 Adébáyọ̀ Adelabu, governorship candidate of Accord in Oyo State has been advised to go contest with the likes of Aliko Dangote and others if he feels he is the best investor.

Teslim Folarin, governorship candidate of the All Progressives Congress, APC, in a reaction to remark by Adelabu, who was the candidate of the party in the 2019 election before defecting to his new party after failing to get the gubernatorial ticket, at the British Broadcasting Corporation, BBC Yoruba, debate in Ibadan, said: “We would like to ask him (Adelabu) what individual candidate’s choice of business has got to do with political campaigns? The statement credited to the Accord gubernatorial candidate has further portrayed him as a learner in the field of politics. Whatever success he is laying claim to in the business world was there in 2019 when he ran an uninspiring campaign for the same post and he lost scandalously.

Adelabu had, during the debate, described both the Peoples Democratic Party, PDP, and APC candidates, Governor Seyi Makinde and Folarin respectively, as people without stakes in Oyo State because they have no investments in the state.

”Before Governor Seyi Makinde was sworn-in in 2019, he declared N48 billion assets. The APC governorship candidate, Sen. Teslim Folarin has represented Oyo Central Senatorial District three times, meaning he has been collecting government money for 12 years. Please ask both of them why they have not established a single factory, even if it is a pure water factory that will employ at least five persons, in Oyo State?

“Why are they taking all their money abroad? They are like birds which fly as soon as the tree falls. They are portmanteau politicians. If anything negative happens, they will easily relocate abroad. I can not leave Oyo State because my treasures are here.

“Wherever your treasure is where your heart goes. Since I lost election, I have not relocated from Ibadan. I have met and engaged more people that can be of help in my election. And I have also learnt and invested more in the state. There has been no year that I did not add new investments in the state since 2019 because as a stakeholder, I won’t want the state to regress or collapse. All my businesses and family members are in Oyo State. My friends are here. I grew up here,” Adelabu had said.

But reacting, the three-term senator, who spoke through the APC Publicity Secretary in the state, Mr Olawale Sadare, has explaining that “For the avoidance of doubt, Sen. Teslim Folarin has been involved in the business of government at the zenith level in the country for more than 20 years now and he has never been found wanting. His chain of business in the corporate world did not matter to us when he was seeking the ticket of our party because neither the Electoral Act nor the APC Constitution requires him to submit the record of his private business engagement.

“If Mr. Adelabu feels he is the best investor in the world, he should leave politics for the serious players and strive to compete favourably with the Dangotes, Adenugas, Elumelus or even Bill Gates of this world. The fact remains that the remnants of Mr. Adelabu’s bloated ego will be finally deflated in the next general election and the shame of electoral defeat would make him run away from future contest.

We at APC will never take him seriously because he is not ready to learn at all.”