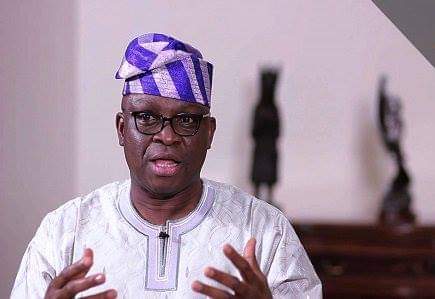 The immediate past Governor of Ekiti State, Mr. Ayo Fayose has described the recent gang-up against the national leader of APC, Asiwaju Bola Tinubu as the handiwork of those he brought up who are now traitors in his camp.
In his words,Fayose said, “I am making it clear that if you trace our history, our leaders have always been given away by men they brought up, by traitors within their camps.

“If somebody gives you a platform you never expected in life and the only option you can do is to trade that person for you to rise, that will never work”.
Fayose described Tinubu as a major figure in Yoruba nation, stressing that if anything happened to Tinubu, every Yoruba is reasonably consumed as it would send a wrong political signal to an ordinary person.

Fayose emphasised that he was not defending Tinubu, but the Yoruba nation and establishing the fact that Tinubu remained a major key leader that nobody could ignore, even if you were not in APC.
Says Oshokomole, as fondly called by his followers,”I have said it severally, I am not in APC and I will never be in APC, but if you want to sacrifice Asiwaju Tinubu because of these cheap Political opportunists, it’s not going to work.
“In due course water will find its level because Tinubu has paid his dues, made his marks, so rubbishing him will not be an option for those ingrates to pay him back”,Fayose stated in feat of anger.
He concluded that without Asiwaju Tinubu, there would not have been a Buhari and that Tinubu would have realised now that he miscalculated, saying nobody could question God.
Fayose was of the view that the gang-up against Tinubu would backfire on his betrayers.