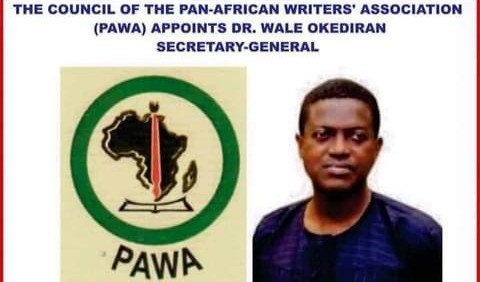 …Says his appointment is a round peg in a round hole.

“As Dr Wale Okediran assumes office as Secretary-General of Pan-African Writers Association (PAWA), President Muhammadu Buhari says “the appointment once again attests to the excellence exhibited by Nigerians in almost all areas of human endeavour.”

Okediran, a medical doctor-turned-writer, was President, Association of Nigerian Authors (ANA), and former member of the House of Representatives.

The President describes his appointment as “round peg in a round hole,” as Dr Okediran has made name and reputation as a skillful writer and author of many books.
President Buhari urges the PAWA Secretary-General, who will be domiciled in Ghana for his tenure of office, to continue bearing aloft the flag of Nigeria”.