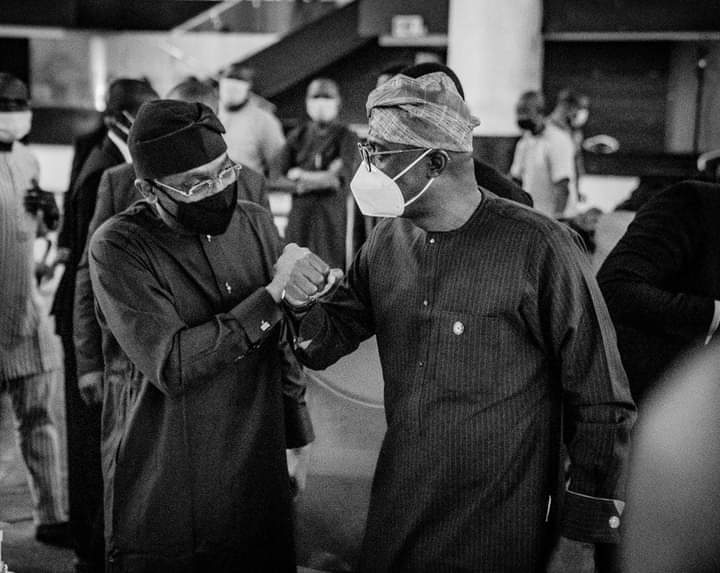 Members of the National Assembly from Lagos State will continue to contribute their quota and complement the state government towards the development of the state, the Speaker of the House of Representatives, Rep. Femi Gbajabiamila, has said.

Gbajabiamila said “Lagos remains the centre of innovation, the preferred destination for investment and home to more Nigerians than anywhere else in the country,” hence the need for all Lagosians to continue to work assiduously to make the state better.

Speaking at the 16th Executive/Legislative Parley of Lagos State with the theme ‘A Consensus Agenda for Rebuilding Lagos,’ on Friday, the Speaker commended the State Governor, Babajide Sanwo-Olu, for the excellent leadership he has been demonstrating since he came on board.

He said Lagos has “faced a public health crisis, unlike anything that has ever come before. For weeks, Lagos was the arena for protests against police abuse of power. We experienced an explosion of violence that caused the destruction of public and private properties and the unfortunate loss of lives.

“But as the poet wrote, the storm passed through us and around us, it has gone, but we remain. Surviving challenges and marching on towards progress and prosperity is the story of Lagos state.

“Amid a global pandemic, despite the protests and upheavals, and all the other varied challenges, Lagos remains the centre of innovation, the preferred destination for investment and home to more Nigerians than anywhere else in the country.”

He said despite the upheavals, Governor, Sanwo-Olu “picked up the pieces and is gradually taking the state out of the ruins of those dark moments. The Governor, his cabinet members and other arms of the state government are not alone in this rebuilding process. You have the unwavering support of members of the National Assembly from this state.”

The Speaker added that Lagos state is a trust placed in the hands all of Lagosians who serve in government, saying they must show that they are worthy of the responsibility to honour and preserve that trust.

“This gathering is an opportunity for an honest appraisal of where we are and what we need to do to recover what is lost.

“I urge us all to make the most of it.
We need unity across the arms of government. This unity does not mean subservience and is not a justification for failure to hold each other to the highest standards.

“The way the Lagos state government has come together to seek solutions to problems, confront and overcome challenges jointly is a testimony to what can be achieved when we are together. Nation-building is a joint task, as is the pursuit of excellence.

“We must do everything within our collective power to defend this state from those who will seek to turn our differences against us and cause our strength of unity and tolerance to become our weakness.

“It is pleasing to inform you that as your elected representatives in the National Assembly, we have exercised our privileges in attracting more federal presence to our various constituencies and senatorial districts.

“From my own constituency in Surulere to Epe, Ikorodu, Ikeja and many other parts, you will see us complementing the efforts of the Lagos State Government. None of these projects could have been achieved without the support of Ministries and Parastatals of the state government.

“We need each other to succeed in fulfilling our electoral promises to our people. The recent events have placed higher responsibilities on every one of us seated here. I am confident every one of us will work together for a greater Lagos.”