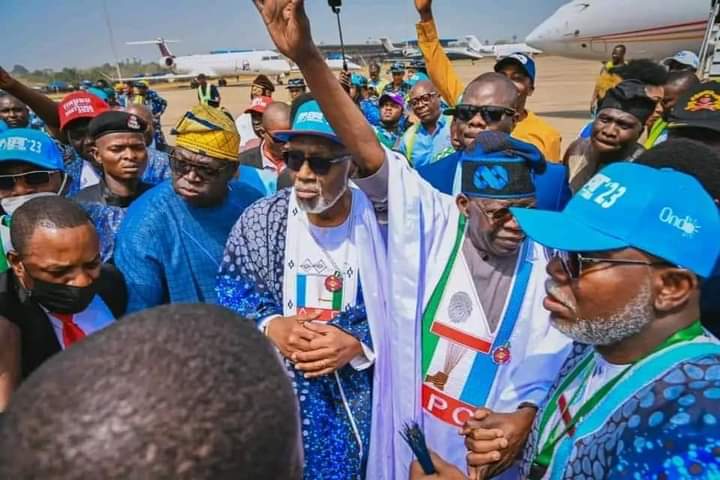 Akure, the capital of Ondo State stood-still on Saturday as mammoth crowd thronged major streets in the town to catch a glimpse of the Presidential candidate of the All Progressive Congress (APC) Asiwaju Bola Ahmed Tinubu.

Tinubu was in Akure in continuation of the Presidential campaign rally of the APC.

Massive crowd stormed the Akure Airport to received the APC candidate. The huge crowd followed the long motorcade conveying the Presidential candidate to the venue of the rally.

The massive crowd filled the expansive M.K.O Abiola Democracy Park, venue of the event, to the brim.

Minister of State for Transportation, Prince Ademola Adegoroye; former Governor of Osun State, Alhaji Gboyega Oyetola; National Secretary of the APC, Senator Iyiola Omisore; other members of the National Working Committee, members of the Ondo State Executive council, leaders and members of the party, were also on ground to receive the APC Presidential candidate.

The jet conveying Asiwaju Tinubu and his entourage touched down at exactly 12:50pm at the Akure Airport.

At the rally, the former Lagos State Governor promised to make the coastal area of the state a tourist centre.

According to him, if elected, his government will develop Ondo Deep Sea Port and develop hydroelectricity.

He said he will give the people uninterrupted energy and not estimated billings, adding that the people will enjoy good governance.

His words:”We will tame the surge of Atlantic like we tamed the surge in Lagos. For good and proper things to happen in this country, we will definitely look at all the abandoned projects and failed promises of the past and rehabilitate them, give you the opportunity to become a manufacturing centre and economic centre in Ondo state.

“We will definitely develop Ondo Deep Sea Port. We will develop hydroelectricity and give you uninterrupted energy and not estimated billings, stealing your money. We will do more . Don’t create conflict, don’t create enmity, we are a people of peace, progress and prosperity.

“The message we bring here today is that of a renewed hope, a renewed assurance that education will receive priority in our government. No children of the poor will be left behind.

“If you don’t have the money we will establish student credit loan so that you can go to school. You will be educated, you will be experts to be what you dream and desire to be. Your future will not be bleak. You are given this assurance by me, you trust me, you trust what I did in Lagos.”

Tinubu assured Nigerians of renewed hope, promising to change the narratives of the people of the country for good.

Others were Minister of State for Transportation, Prince Ademola Adegoroye; former Governor of Osun State, Alhaji Gboyega Oyetola; National Secretary of the APC, Senator Iyiola Omisore; other members of the National Working Committee, members of the Ondo State Executive council, leaders and members of the party and thousands of APC supporters and loyalists.

He appreciated Governor Akeredolu for always standing up for justice and fairness, stressing that Ondo State is the home of the progressives.

Asiwaju Tinubu informed the mammoth crowd that the coming election is for the betterment of the people and the country in general.

The former Lagos State Governor pleaded with the people not to lose their PVCs, saying the rally signaled a renewed hope for the country.

Tinubu, who expressed confidence that he will win the election, also urged the people not vote for those who will sell their future or make their children go to bed hungry.

He said he was determined to create safer, more prosperous and dynamic society.

According to him, the progressive governance can only be brought to the people by someone who had once governed in a progressive manner.

He noted that the PDP Presidential candidate is not ready to do the courageous and hardwork required to build a better nation.

“He cares little that his policies and actions will impoverish you and you will be left with nothing.” He added.

Tinubu also took a swipe on Labour Party Presidential candidate, Peter Obi, describing him as a wicked parent who held money in his hand while the children go to bed hungry.

He noted that Nigerians cannot entrust their future or that of the nation to “Mr Sell Everything” like Atiku and “Mr Stingy like Obi” .

The APC presidential candidate said himself and his running mate, Shettima have brought a message to renew hope through empowerment to all Nigerians.

“I love what Akeredolu has done. I respect Governor Oluwarotimi Akeredolu, he has improved infrastructure status of Ondo State. He has restored Ondo State glory in the plantation. Cocoa plantation will fetch fortunes, he has put Bitumen on front burner. He is chatting the path of industrialization of Ondo State. He is making Ondo State a definite tourist destination.” He said.

The host and Ondo State Governor,Arakunrin Akeredolu, who assured Tinubu that Ondo State is a progressive state, said the APC will emerge victorious in the coming elections.

He appreciated all the party leaders and governors, especially Ganduje for gracing the rally.

Also, the National Secretary of the party and former deputy Governor of Osun State, Senator Iyiola Omisore, said Nigerians will vote APC in the coming elections, promising that APC will change the narratives and bring hope to the hopeless.

“We are united under the able leadership of Governor Oluwarotimi Akeredolu. Ondo State will beat Lagos State in terms of numbers of votes. APC will deliver Ondo State for Asiwaju Bola Ahmed Tinubu. All our candidates for Senate,, Reps and House of Assembly will win in the coming polls”, Adetimehin added.