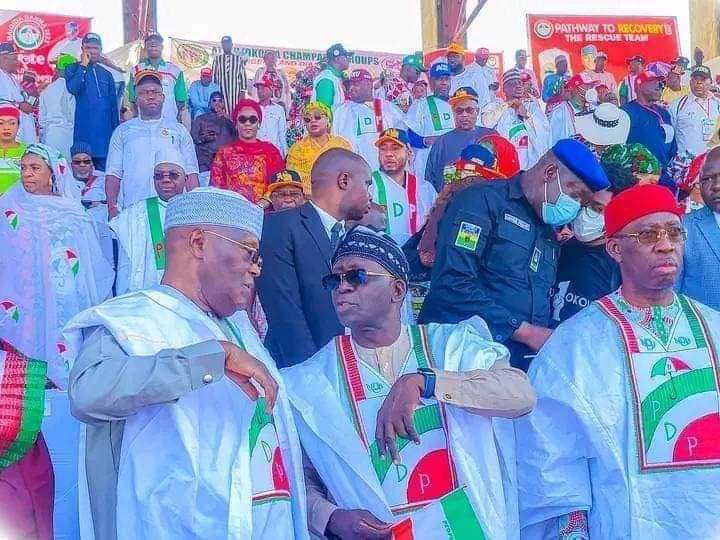 It was a momentous occasion today, as Lagos State played host to the People’s Democratic Party (PDP) Presidential Candidate Atiku Abubakar and his team in Tafawa Balewa square Lagos.

The rally witnessed the presence of huge party faithful and supporters, with the presence of several prominent Chieftains of the party, including the National Chairman Senator Iyorchia Ayu, the Chairman of the Party’s Presidential Campaign Council-Governor Udom Emmanuel of Akwa-Ibom State, Governors Duoye Diri of Bayelsa and Darius Ishaku of Taraba State.

Speaking at the occasion, the PDP Presidential Candidate, Atiku Abubakar told Lagosians to disregard the spurious claims by some individuals who continue to say that they developed Lagos, noting that Lagos is a creation of the Federal government and was actually developed by Nigerians and not one individual.

He urged Lagosians to take their destinies into their own hands with a determination towards liberating themselves from one family dynasty, by voting for Jandor, who is the PDP Gubernatorial Candidate in the State.

Furthermore, Atiku promised to set up a $10 billion development fund, which will be used to support the MSMEs in the country. The former Vice President stated that the funds for these incentives would come from the privatization exercise that would be carried out by his government, if elected into power.

The Wazirin Adamawa also promised to restructure the country by devolving more powers to the states and local governments.

Earlier at the occasion, the Gubernatorial Candidate of the party in the state, Jandor decried the state of poverty and unemployment ravaging the entire Lagos and promised to bring to an end the illegal activities of touts and miscreants who constantly extort people of their legitimate incomes, even as these harassments are alleged to be perpetrated by agents of the state government.

Jandor enjoined the people of Lagos to vote massively for Atiku, whom he described as calm and sober to the plights of Nigerians, coherent and truly Presidential in attitude.

Speaking in the same vein, the PDP National Chairman Senator Iyorchia Ayu, thanked the mammoth crowd of party faithful and supporters, who trooped out in their numbers to welcome the PDP team and mentioned that their determination and commitment to bring PDP back to power will not only liberate Lagos state, but the whole country.

The former Senate President stated that the PDP administration will implement policies that will create wealth and alleviate poverty.

On his part, the chairman of the PDP Presidential Campaign Council, Governor Udom Emmanuel of Akwa-Ibom State, praised the people of Lagos for the courage to troop out in their numbers to attend the Presidential rally, despite several reports of intimidation by some overzealous Lagos State government officials, who were alleged to have blocked the route to the venue of the rally.

He saluted their resistance, even as they equally placed embargo on all PDP adverts, all in their quest to frustrate the party in the state. He urged Nigeria to vote Atiku/Okowa to rescue Nigeria from the current APC maladministration as the PDP Government will attract the right investments that will restore the economic fortunes of the country.