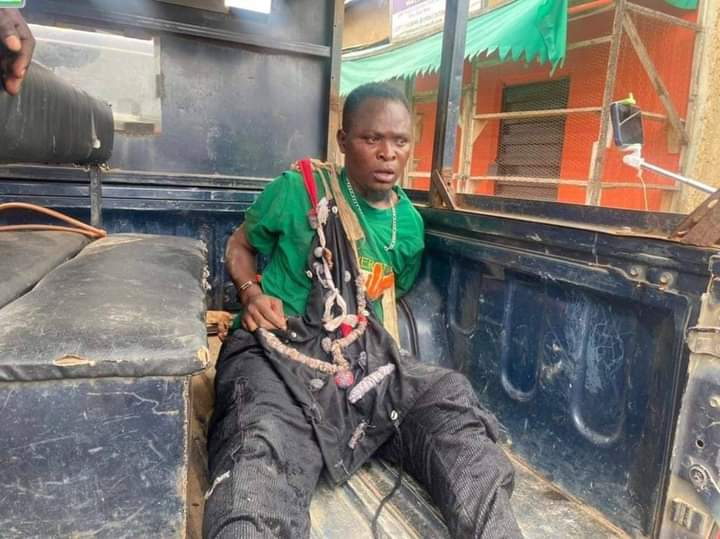 The suspect, who reportedly gave his name as Ezekiel, was arrested by the Nigerian police in the Ifofin area of Ilesha in Osun State.

Security operatives deployed to monitor the ongoing governorship election in Osun State have arrested a suspected hoodlum with charms. The suspect, who reportedly gave his name as Ezekiel, was arrested by the Nigerian police in the Ifofin area of Ilesha in Osun State.

According to reports, the suspect said he resided in Lagos and had to come to Ilesha to work.

Meanwhile, some people in the area have faulted the police, querying when it had become an offence to wear charms.
Across Osun State today, up to 1,955,657 registered voters are expected to exercise their franchise across the 3,763 polling units to elect a new governor for the state in a keen contest.
Soldiers, policemen and members of the Nigeria Security and Civil Defence Corps (NSCDC) have been sighted in strategic locations around the state capital and border towns.

The election, which will be contested by 15 political parties, expected to be a straight duel between the incumbent governor, Gboyega Oyetola of the All Progressives Congress (APC) and Senator Ademola Adeleke of the Peoples Democratic Party (PDP).

Other candidates in the race are the former Deputy Speaker of the House of Representatives, Lasun Yusuf of the Labour Party, Goke Omigbodun of the Social Democratic Party (SDP) and Akin Ogunbiyi of Accord Party

More voters are expected to participate in the election than the 2018 poll when 767,444 electorates out of the 1,668,524 registered voters exercised their franchise.