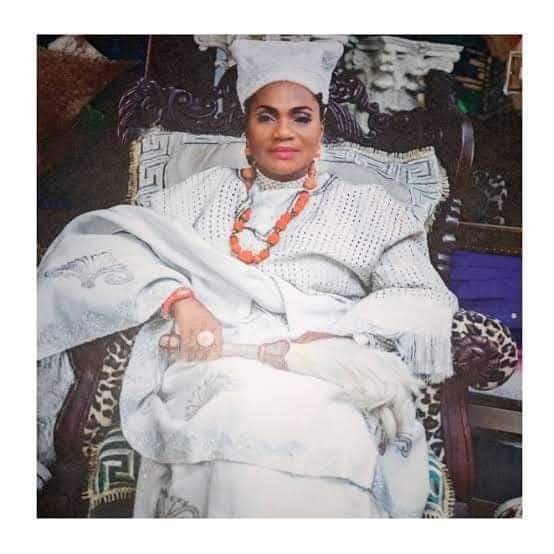 The Royal Court of Ife under the supreme leadership of the Arole Oduduwa Olofin Adimula, Ooni Adeyeye Enitan Ogunwusi Ojaja II, the Ooni of Ife wishes to announce the appointment the Erelu Kuti IV of Lagos, Erelu Abiola Dosumu, as the new Yeye Oodua and Queen Mother of the House of Oduduwa.

Her appointment is sequel to the vacant state of the prestigious title since the demise of the wife to the late political sage; Chief Obafemi Awolowo, Mama H.I.D. Awolowo who was the immediate-past Yeye Oodua of the source.

It took the Royal Court of Ife this long to announce a successor because of the numerous achievements of the immediate past Yeye Oodua H.I.D Awolowo especially in the areas of human development and capacity building, preservation of the prestigious Yoruba culture as well as sustainance of peace and tranquility across Yoruba land among others.

The choice of Erelu Abiola Dosumu is indeed an unanimous decision of the Ife Traditional Council and major stakeholders of Oodua race, agreeing that her character, personality and her wealth of experience as an international business woman, a royal ambassador and a great icon of the African culture perfectly qualify her to step into the big shoes earlier worn by late Chief Mrs HID Awolowo as the immediate past Yeye Oodua.

In almost half-a-Century of public life, Erelu Dosumu has proven herself to be an outstanding woman of stamina, integrity and far-reaching influence. In 1980 late Kabiyesi Adeyinka Oyekan, the Oba of Lagos, installed her as the Erelu Kuti IV of Lagos. With that appointment, she became the right hand person of the Oba of Lagos. Since then, she has executed her charge with maturity, sagacity, courage and commitment. Indeed since then, the beautiful and ageless Queen mother, has become an enviable cultural Face of Lagos; its traditional allure and ageless charm.

By bringing Erelu Dosumu into the Court of Oduduwa, Ooni Ogunwusi is paying tribute to the age old tradition of the Oodua people that recognizes the power and position of significant matriarchs who had earlier dominated and still dominate the social, political and business landscape of the Yoruba nation and the lager race globally.

Erelu Dosumu would be adding value to the Court of Oduduwa as a well connected aristocrat who for many years has been part and parcel of the influential class of Nigerian royalty.

Even though Erelu Abiola Dosumu had during the days of the Ooni Ogunwusi’s illustrious predecessor, Ooni Okunade Sijuwade, Olubuse II, been a welcomed and honoured presence at the Ooni’s Palace(Ile-Oodua) in Ile-Ife. Now she is going to become a more significant member of the most ancient royal court in the entire Oodua nation worldwide.

Since her accession in 1980 as Erelu Kuti IV, Abiola Dosumu has consistently followed the example of her illustrious forebear, building a business empire and creating a wide-ranging network of friends and influence in Nigeria and across the globe. Though she had never held any political office, she has become well-known as a significant member of the power elite of Nigeria. She had been married twice. Her first husband was Major Elegbede, a hero of the Nigerian Civil War who was involved in the decision of the General Yakubu Gowon government to create Lagos State. He died in a motor accident shortly after the war. After his death, she later married the international business man, the late Chief Deinde Fernadez. Her social status was confirmed by Nigerian leading Juju music star, King Sunny Ade, who waxed a memorable record in her honour.

Dosumu was born in Kano on July 29, 1947, to OmoOba Adewunmi Dosumu, a Lagos prince and his wife, Adejoke. She was educated in Nigeria and in the United Kingdom. She went into business early and became the first Nigerian to open a shop on the highbrow Bond Street in London, United Kingdom. She had made a fortune dealing in the lucrative oil business and promoting the Yoruba traditional wear, Aso Oke, which she has sold all over the world.

As a traditional aristocrat, she has found a conspicuous place in the traditional power structure of Lagos when her uncle, Oba Adeyinka Oyekan made her the Erelu Kuti IV.
With that title, she became the leader of the Lagos women and the official Queen Regent of Lagos when the oba passes on. She is a member of the Council of Kingmakers and an official principal adviser to the Oba. She is also the head of the various women groups in Lagos as well as the leader of the powerful women market guilds. She also holds royal titles In Egbaland and other places. She has been honoured in many countries and also bagged honourary doctorate degree from the Crescent University, Abeokuta and Igbinedion University, Okada, Edo State. She has a reputation as a shrewd businesswoman as well as a painstaking fashion pacesetter.

The new honour coming from Ile-Ife which is the source and traditional headquarters of the Oduduwa people worldwide is only a confirmation of the role she has been playing for many years as among African royalties. She is at home in many palaces across Nigeria.

Her new pedestal as the Yeye Oodua would afford her greater field of play but also impose on her wider responsibilities across Oodualand and the Diaspora. due course.

In line with the ancient tradition of Ile-Ife, a 3-day traditional rites to communicate with the ancestors will begin from Thursday 21st while the official installation ceremony will be held on Saturday 23rd July, 2022 at the courtyard of the Ooni’s Palace (Ile-Oodua) in Ile-Ife.