It was the end of the road for two robbers on Thursday, June 23, in Ibadan, the Oyo State capital, when an angry mob set them ablaze after they snatched a motorcycle popularly known as Okada from a commercial motorcycle rider.

They were sent ablaze at the Ijokodo-WAEC area along the Sango-Eleyele highway after they snatched the Okada at the Ologuneru area and were pursued by other Okada riders who then caught up with them.

I was heading towards WAEC office in Ijokodo when I saw a crowd that gathered and with smoke pervading the scene.

On getting to the area, I asked an onlooker what happened and he told me that the two young men were set ablaze after snatching a commercial motorcycle from the owner around 8:00 a.m.

I also asked an official of the Oyo State Road Transport Management Agency (OYRTMA) who was also at the scene for details of the incident and he told me that the information they got was that the two robbers snatched the Okada at Ologuneru and were pursued to Ijokodo before they were caught up with.

According to his report, as they snatched the Okada, the owner raised the alarm and this caused other Okada riders around to pursue them from Ologuneru to Ijokodo, a distance of about four kilometres, and eventually caught up with them.

When they were apprehended, according to the onlookers at the scene, the two robbers were said to have disclosed that they came from the Agodi Gate area of the city to snatch the motorcycle at Ologuneru.

However, it was gathered that by this time, more Okada riders and other residents of the area had converged and started beating the two robbers mercilessly. Some of the Okada riders later scooped petrol from their motorcycles and poured it on the robbers before setting them ablaze.

The photographs of their burnt bodies may be too gory for use in this article.

However, shortly after the two robbers were set ablaze, policemen from the Sango Division of the Oyo State Police Command raced to the scene and dispersed the crowd while officials of OYRTMA were also seen pouring water on the fire that was set on the robbers.

By the time I left the scene, policemen had taken over the road while efforts were being made to remove the burnt bodies of the robbers. 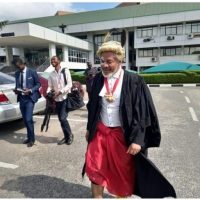