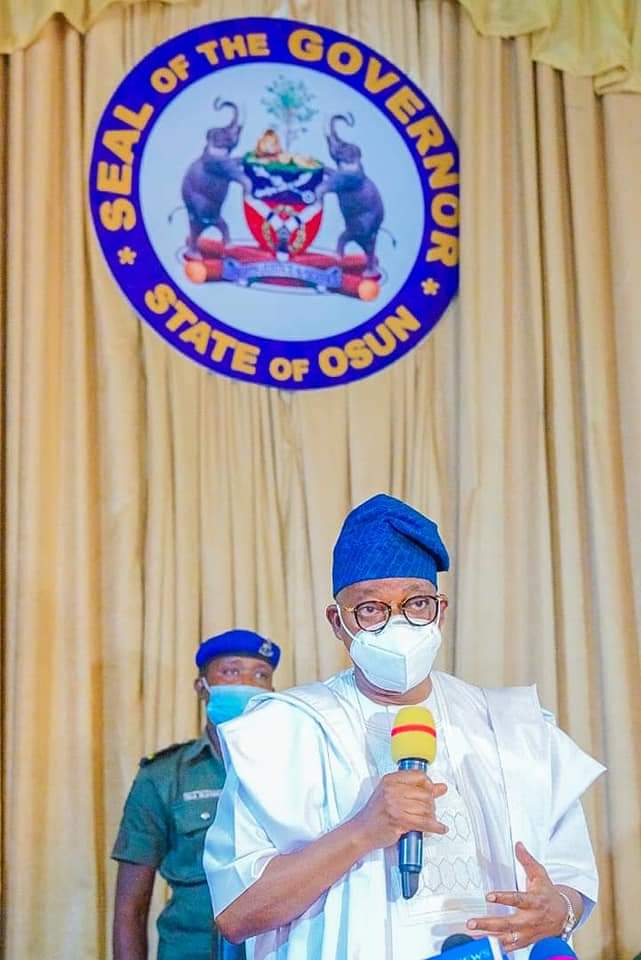 The Governor of the State of Osun, Adegboyega Oyetola, has assured of a hitch-free exercise of the recently flagged-off nationwide membership registration and revalidation of the All Progressives Congress (APC) in the State.

He said the party was resolute to continue to maintain and sustain its leading role as the ruling party in the country.

This is even as the party commenced the Southwest membership registration and revalidation exercise with stakeholders’ meeting in Osogbo, the Osun State capital.

The stakeholders’ meeting was convened at the instance of the leadership of the party and the collective resolve to intimate and equip the chieftains and members of the party with necessary information to ensure free, fair, smooth and crisis-free registration exercise.

Addressing the members of the party during the stakeholders’ meeting heralding the formal registration and revalidation of the party’s members in the State and the Southwest at the Banquet Hall, Government House, Osogbo, Oyetola called for decorum before, during and after the registration exercise.

The Governor assured of the party’s readiness to conduct a free, fair, credible and hitch-free registration exercise as the government was determined to provide adequate security to achieve the set objectives.

He admonished the party’s members, particularly chieftains, to avoid taking crowd to the registration points, saying such act would contradict the Covid-19 safety protocols.

While enlightening members of the party on the importance of the registration exercise, Oyetola said the exercise was as important as the party itself.

“I am sure you are all aware of this exercise. Even before the beginning of this exercise, some were asking why we needed to go for another registration and revalidation. The answer was that some were very young at the last time a similar exercise was done.

“It is important for us to know who is who in APC and that is what we are doing. The exercise is simple. It is just for one to register if one has not done it before. For those who have registered, all they need to do is to revalidate their membership.

“I don’t envisage any problem. But I urge our people to be orderly and maintain decorum. Let’s portray the virtues of Omoluabi ethos that our state is known for. Osun is known for peace. Let’s display that before, during and after the whole exercise.

“Don’t allow those that are not residing in your polling units or wards to register. We all know ourselves and if you see any stranger, alert members of the registration committee for proper action.

“We are going to provide adequate security to ensure seamless exercise. Party members and leaders are enjoined not to take crowd to the registration points that could create unnecessary intimidation because the exercise is not a collective registration. Rather, it is an individual exercise.

“As we all know that one cannot be a member without being registered, so also the exercise is very sacrosanct as it helps to generate statistics of the membership strength of our party; and through this, every member will have a unique number,” he added.

Earlier, Chairman, All Progressives Congress (APC) Membership Registration and Revalidation Committee in Osun, Barrister Femi Odufowokan, enjoined the party loyalists to continue to display the good character which had earned the party accolades as peaceful political party in the country.

He reiterated the readiness of the committee to ensure free and credible registration exercise in the state, adding that Osun is going to be the contact point to other states in the southwest.

Odufowokan who said the party would continue to maintain and uphold the spirit of internal democracy, noted that the registration exercise would go a long way to strengthen the bond of unity and togetherness among the party’s loyalists.

He said the registration exercise for the southwest region would be flagged off in Ila-Orangun, the country home of the party’s pioneer Chairman, Chief Adebisi Akande, adding that the exercise would take two weeks upon the day of commencement.

Also speaking, Osun APC Caretaker Chairman, Prince Gboyega Famodun, urged members of the party to see the registration exercise as a family affair which must be cherished and treasured.

Speaker, Osun House of Assembly, Timothy Owoeye, tasked the party chieftains on the need to ensure massive mobilisation for the registration exercise.