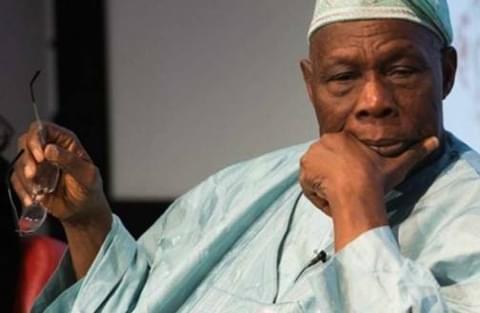 Obasanjo, in what appeared to be his first official reaction, since Adesina’s re-election penultimate week, also thanked some past and present African leaders for their supports during the period.

The former President made these disclosures when the leadership of the Freelance and Independent Broadcasters Association of Nigeria (FIBAN), led by the National President, Comr. Desmond Nwachukwu paid him a courtesy call at his Olusegun Obasanjo Presidential Library (OOPL) Pent House residence in Abeokuta, Ogun State capital.

Obasanjo who was responding to remarks made by the FIBAN President on the support given to Adesina, added that education played a vital role in the success so far made by him and other Nigerians doing the country proud in their different endeavour.

“I must commend the Federal government for the support given to him to get this second term ticket. You know that the former President, Goodluck Jonathan recommended him before this new government came on board. The government could have rejected him. So, I must commend President Buhari for supporting him all through.

“Also, let me acknowledge and commend some of my colleagues, the 14 former Presidents in Africa for joining me immediately I drew their attention to it. Some present Presidents also deserved commendations too,” Obasanjo said.

The former President emphasized on the importance of education, noting “if Adesina had not gone to school, no matter the innate ability God might have given him, he would not have got to where he is today.

“So, the first thing is how do we get about 14m children, who are out of school now back to school. 14m children who should have been in school, undergoing education training that will make them contribute to the development of the country in the near future.

“It is having a good education, that will make them a good product to market in the global world like Adesina. Not only him, we have several like him, including the AFRISM President, Dr Oramah,” Obasanjo said, even as he observed that the country’s present image was not fairing to assist these potentials.

Obasanjo appreciated the members of the Association for the visit, moreso for the commendation on his support for the AfDB President.

The FIBAN national president had earlier disclosed that the former President’s penchant for grooming talents for leadership positions led to the emergence of Adesina, and as such, “the association is therefore using this opportunity to congratulate you on the historic re-election of Adesina.