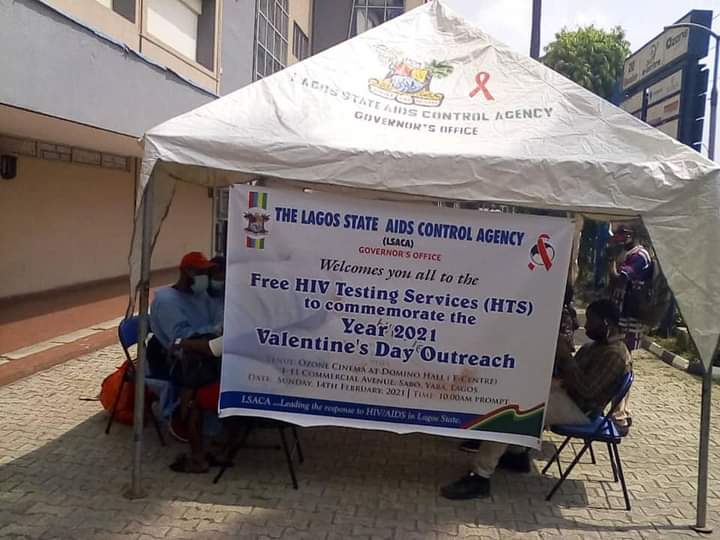 The annual outreach, usually done in commemoration of Valentine’s Day, is designed to conduct free HIV testing, sensitise and enlighten the populace on the factors associated with the virus as part of the Agency’s mandate of preventing its spread in the State through targeted interventions.

Whilst addressing pressmen at the HTS Center on Sunday, the Chief Executive Officer (CEO), LSACA, Dr. Monsurat Adeleke noted that the outreach is targeted at the AYPs, as they constitute 43 percent of the State’s population.

She said: “According to the State Bureau of Statistics, 43 percent of the State’s population are AYPs and the group is highly vulnerable to HIV infection due to their low-risk perception as evidenced by the State’s HIV prevalence of 1.4 percent”.

Asserting that Governor Babajide Sanwo-Olu, who doubles as the Chairman of the Agency, has exemplified his administration’s commitment to youth development by his approval to release funds as well as the implementation of HIV/AIDS sensitisation and awareness campaigns, Dr. Adeleke stated that the outreach is strategically designed to attain the Global epidemic control of HIV/AIDS, through the UNAIDS 95-95-95 initiative, by 2025.

She explained that the outreach provides individuals with an opportunity to know their HIV status and adopt HIV prevention strategies, saying “Persons who test positive for HIV shall be immediately referred to one of the free HIV treatment facilities in the State, where they would be initiated on Anti-Retroviral drugs to attain the third 95 percent viral suppression. Thereby, ultimately achieving undetectable viral loads, which equals to “non-transmissible virus”.

Dr. Adeleke emphasised the importance of the HIV counselling services provided which, she said, addresses lifestyle modifications as it relates to each individual, whereby community members are enlightened on safe sex practices with Information, Education and Communication (IEC) materials and condoms.

Noting that there were practical illustrations on how to use the HIV oral self-test kits during the outreach, the CEO further stressed that the achievement of the 95-95-95 Initiative is a key step towards the eradication of new infections by the year 2030.

She said the Agency adheres strictly to the Nigeria Centre for Disease Control (NCDC) protocols as demonstrated by counsellor testers fully kitted in their Personal Protective Equipment (PPEs) and Community members also sensitised on COVID-19 Infection, Prevention and Control to halt the spread of the deadly disease.

Adeleke urged residents, especially the AYP, to spread the love and not the virus, saying they should always take precautions against HIV and COVID-19.

Also speaking at the event, a representative of the Local Action Committee for AIDS (LACA), Lagos Mainland Local Government, Mrs. Taiwo Ogunyemi noted that the outreach is aimed at reducing the implications of HIV in communities and ensuring the populace know their HIV status.

One of the beneficiaries of the service, Esther Olohunwa, commended the government for reaching out to the Youth and other residents on the need to know their status and for always organising the test and counselling services all year round.

While encouraging residents to know their status and shun stigmatisation of people living with HIV, Olohunwa stressed that being infected with the virus is not a death sentence.