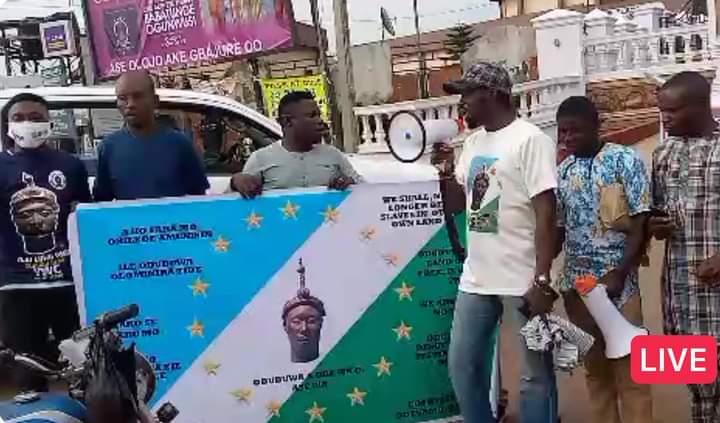 The Secretary of Yoruba Council of Elders, Dr. Kunle Olajide has condemned the agitation by some groups in Yoruba land seeking for secession and independence of Oduduwa Republic.

The Council berated the agitation and called it a child-play as there has not been a consensus on the parts of Yoruba land that will form the said Oduduwa Republic.

According to him, Lagos has said it is not part of Oduduwa nation, and the head monarch of Ijebu land in Ogun State said his people migrated from North Africa.

“I visited the war front almost immediately after the truce and what I saw there, I would not wish it for my enemies. As far as the Yoruba nation is concerned, I will not lead my people to commit mass suicide,” Olajide said.

“The idea that they can have a peaceful exit is more theoretical than real. There is nothing like the 107 groups,” he said, referring to claims by Akintoye that the call for self-determination for the Yoruba nation had been signed.

“There is nowhere we have sat down and had a consensus to say we want the Yoruba nation. For us, we believe that if we can have a true Federal Republic of Nigeria, in 50 years, Nigeria will be leading Africa in all parameters of human existence. In 75 years, we will be in the league of first-world countries.”

He said although the Yoruba were not happy with the imposition of the Fulani political elite, who are in the minority, breaking up the country is not the preferred outcome.

“Yoruba people are justifiably angry about the system we are running that has completely diminished the upward development of the Yoruba people and has rendered most of the youths who constitute the majority of our population jobless. Nigeria appears to have reached the beginning of the end to this unitary, centralised pseudo-federalism we are operating,” he said.

Olajide expressed optimism that other regions of the country will soon join the call for true federalism.

He said, “There is no part of Nigeria today that is happy with the Nigeria we have. Since the North Central pulled out of the Arewa Forum, you don’t have any North like we used to have before and if anyone believes there is still a Northern region, that is the most unsafe part of the country today.

“They have all the negative indices of human development in Nigeria. A time is coming, and it is coming too soon that they will be championing for restructuring.”

He said they had been mobilising to break what he described as a ‘tiny political Fulani elite’.

“We have started mobilising. We already have a relationship with the cultural groups in the South and the Middle Belt. We are going to reach out to the North-Central forum so that we can reduce this tiny Fulani elite who have gained power from the constitution and the false sense of population advantage the British gave them,” he noted.