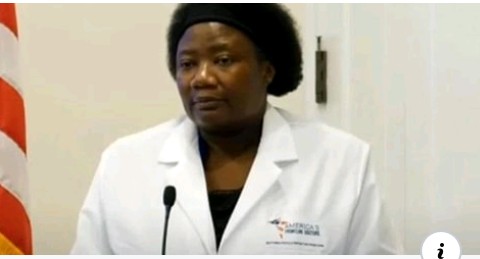 The Lagos Teaching Hospital LUTH Medical Directors has expressed shock over the trending video of Dr. Stella Immanuel, a medical doctor in the United States of America, who claimed that a combination of Hydroxychloroquine (HCQ), Zinc and Zithromax could cure coronavirus.

In a statement yesterday signed by the president of the Guild, Prof. Olufemi Emmanuel Babalola, the medical directors said the video had been shared all over the country and led to many people justifiably asking the question of what doctors think about it.

Olufemi stated that it was important for people to understand it was just Immanuel’s personal opinion, which has no scientific backing and could simply be regarded as “unsubstantiated claims”.

In the video that has gone viral, Dr. Immanuel claimed to have treated over 350 patients in her clinic in Houston, Texas, with the combination of Hydroxychloroquine (HCQ), Zinc and Zithromax.

But Olufemi said “people must understand that this is not scientific evidence and just her own personal, unsubstantiated claims.”

He stated that although some studies had suggested that Hydrochloroquine was effective, while others had come to the opposite conclusion, hence the need for a medical research that had started.

“As we speak, a study is underway in the Lagos University Teaching Hospital (LUTH) on its efficacy and safety. Subsequently, a meta-analysis of all these studies should be undertaken to pool all the results and come up with a summative analysis which will guide clinicians,” Olufemi said.

He submitted that until all these have been done, all anecdotal claims such as the one by Immanuel must be taken with a pinch of salt.