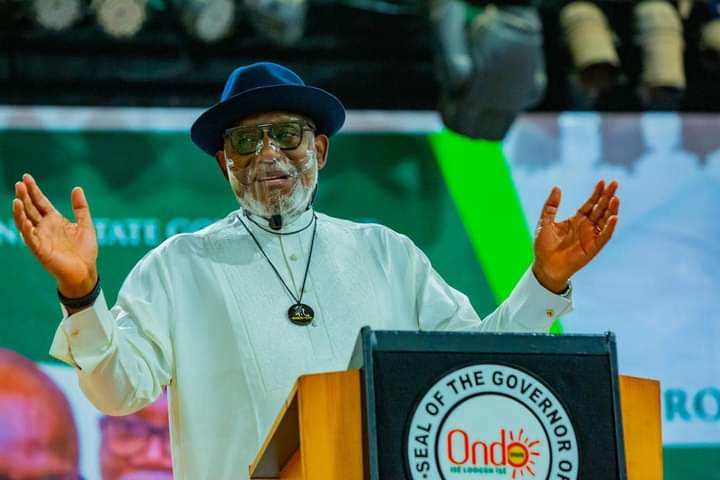 Ondo State Governor, Arakunrin Oluwarotimi Akeredolu, SAN, has blamed the growing sectional activism which he said is gradually replacing National patriotism on the faulty and twisted federalism operated in the country.

He lamented that most Nigerians are losing faith in “Unity in Diversity” sloganeering while urging that the only opportunity to restore national consciousness is through True Federalism.

Governor Akeredolu spoke at a Public Lecture organized as part of the activities marking his 2nd Term Inauguration with the theme “Towards A New Nigeria: From Federal Fatherism To A CommonWealth.”

Arakunrin Akeredolu said rather than building the Nation, Nigerians are more inclined to ethnic nationalism, adding that the people have resorted to clannish satisfaction in place of nation-building.

While identifying insecurity as the most potent threat to national belief, Governor Akeredolu stressed that the consequences are increasingly becoming more daring, adding that the time to act is now.

Speaking on the efforts of the Southwest Governors in tackling insecurity, he said their fight is against criminality and not targeted at any ethnic nationality or business.

He said;” we are against criminality and we shall fight criminality with every legal means. It is in the interest of our collective wellbeing.

“All we require is the support and understanding of all Federating Units, including the Federal Government. The simple truth is that we have lived in self-denial amid an excruciating pain that is almost cancerous now.“

“Notwithstanding our challenges today, my firm belief in the Nigerian Project is strengthened by my fact of a true Nigerian.

“That I desire a more United Nigeria with every ingredient of freedom, rule of law, patriotism, love, mutual respect and harmony is an understatement. And I am prepared to fight for it legitimately for the benefit of all.”

Earlier in his Lecture, Dr Adesina said with good governance and a better accountability system, with a zero-tolerance for corruption, more economically stronger constituents states would emerge.

The AFDB boss called for a change in the relational mindset between the states and the Federal government, saying the fulcrum should be the states, while the centre would support them and not lord over them.

Adesina said there should be a new Nigeria where massive wealth would be unleashed across the states.