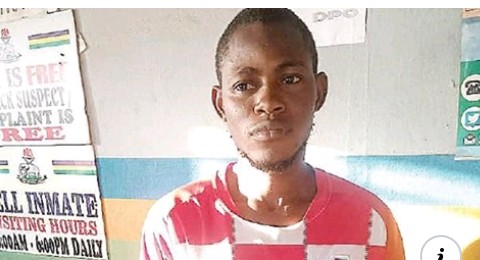 The suspect was arrested on Friday 11th September in Sango by officials of the Nigeria Police Force, Sango Division, after the school proprietress filed an official report to the police.

Teacher Adebayo has been charged for allegedly forcing his way into having unlawful carnal knowledge of the 15-year-old student until the victim couldn’t bear it anymore and cried for help.

The student who was writing her SSCE examination alleged that Adebayo has been forcefully sleeping with her since the school resumed in preparation for the WAEC examination.

The proprietress of the school also said that the suspect intimidated the girl by telling her that she would not pass her SSCE exams if she doesn’t let him to be having sex with her.

According to the proprietress, the teacher would call the girl out of her dormitory at night and take her to a classroom, where he would abuse her sexually.

When the girl couldn’t bear it any longer, she reported the proprietress who then reported to the police.

The DPO of the Nigeria Police Force, Sango Division, CSP Godwin Idehai, sent his detectives to the scene where Adebayo was arrested.

The teacher has confessed to committing the crime, while the victim has been taken to the hospital for medical checkup and attention.