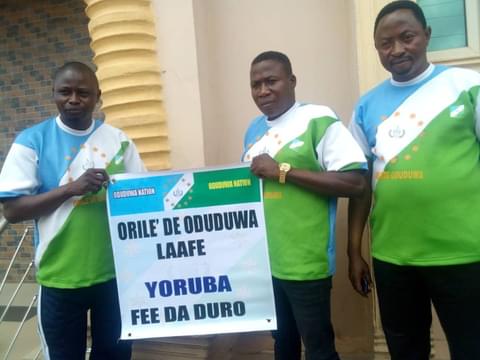 The sociocultural group, Itesiwaju Oodua Foundation in its meeting held yesterday in Ibadan has warned Federal Government to resist pressure from some quarters to put Sunday Igboho behind the bars over statement on secession credited to him.

This was contained in a release signed by the State coordinator of the youth wing of the group, Mr. Abdullateef Ademola and made available to newsmen through her publicity Secretary, Com. Kunle Ajibade.

The Social Cultural Group said, if Buhari led l-administration go on with the plan to arrest Sunday Igboho for agitating self determination of Yoruba race to be recognized as Oduduwa Republic, such plan could destabilize the peace of the entire Nigeria.

The group also called on Yoruba leaders irrespective of their political parties, affiliations or ambitions to close ranks in the interest of all Yorubas to ensure that the self determination is achieved.

In the Youth leader’s words, “we can no longer cope with compulsory and unholy alliance which has subjugated our people under the hegemony of certain tribe that are taking over our lands with force.

“We call on all groups, associations, traditional rulers and all stakeholders to rise and build a garrison around Chief Sunday Igboho and the entire agitators of peace and liberation of Yoruba land.

“Our group is not affiliated to any political party and we insist that Oduduwa Republic is eminent at this critical point that Yoruba land is suffering from external forces migrating into the Southwest to murder, kidnap and take over our God-given lands.

“The group in its last remark called on Asiwaju Bola Hammed Tinubu and Aare Gani Adams to ensure that Yoruba land and her people does not suffer any intimidation or subjugation from the Federal Govt in the course of agitating for the self determination of Oduduwa race.