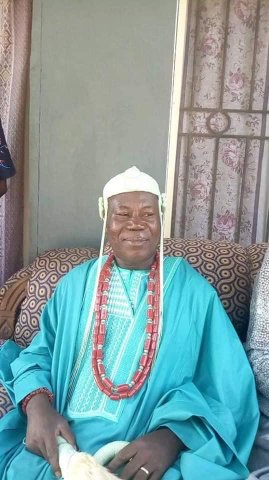 The Alado of Ado-Awaye land and Paramount Traditional Ruler in Araromi LCDA, HRM Oba Revd. Ademola Olugbile Folakanmi, Makuledoye 11, Iludero1, has sent commendation messages to the Oyo State Governor, Engineer Oluseyi Makinde, FNSE over the provision of a new step-down transformer as a replacement to the damaged one.

This was contained in a statement signed and sent today to OduduwaNews by the Principal Secretary to Alado of Ado-Awaye Kingdom, Prince Niyi Okunade

It would be recalled that the entire Ado-Awaye community and its surrounding towns have been in total darkness for more than two years as a result of complete damage of the major transformer which was the supplying agent responsible for the provision of light to community, a situation that has crippled the economic life of the people in the community.

In his reactions after the breaking news that revealed Engineer Makinde’s approval of urgent replacement of the damaged transformer for the community, Kabiyesi said “on behalf of the entire people of Ado-Awaye community both home and diaspora, and on behalf of the Araromi LCDA in general, I wish to passionately commend Eng. Oluseyi Makinde- led- Administration for taking this bold step at restoring light back to Ado-Awaye community and Araromi LCDA in general”, the statement concluded.

Oba Folakanmi further stated that, Engr. Oluseyi Makinde with this gesture, has demonstrated a high level of good leadership and a passionate lover of the people.

According to him, “any government whose interest is in making life meaningful to the people would always enjoy peoples’ support and favour of God”, he submitted.

In a similar development, His Royal Majesty Oba Revd Ademola Olugbile Folakanmi, equally seized the opportunity to remind His Excellency, Engr. Oluseyi Makinde on his promise during the electioneering campaigning to transform Ado-Awaye tourist heritage to a global standard in the interest of Ado-Awaye development and for the economic advantage of the state in general.

In his conclusion, he reiterated the community’s support for the administration of Engr. Seyi Makinde in all ways, while he appreciated the duo of Hon. Timothy Ogunleke, Caretaker Chairman, Araromi LCDA, and Hon. Dele Adeola, Hon. Member representing Iseyin/Itesiwaju State Constituency in Oyo State, for their concerted efforts towards this development,” saying they are the genuine sons of Ado-Awaye and true representatives of the people. He finally prayed for God’s protection and wisdom in their further endeavours in life,” the statement concluded.