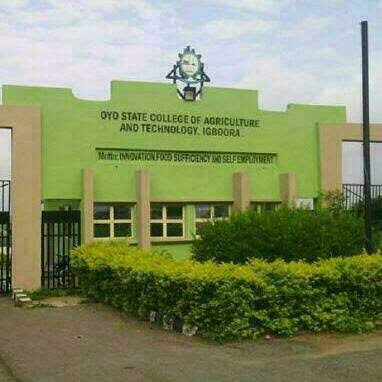 tHe management of Oyo State College of Agriculture, Igboora has made it kwnown to the public that the school has not been shut down contrary to the report that the school has been closed indefinitely. This was made known today in a release made available by the Register to the newsmen by which reads in part:

“The general public are hereby notified that Oyo State College of Agriculture and Technology, Igboora has not been shut, the School is still in session but academic activities was only disrupted by student.

“According to the Students Union president Comrade Salahudeen Hameed Olasunkanmi who spoke with the Acting Registrar of the institution said, “the protest was aimed at drawing the attention of stakeholders to the poor funding of education.”

“It is however, worrisome that some individuals for reasons best known to them decided to mislead members of the public by distorting the facts under whatever guise in order to bring the good name of the management of the institution to a disrepute.

“It should be noted that the Management has never turned deaf hears to the needs of Students and other materials that would make the stay of students on campus an enjoyable one.

” For the records, Students of Oyo State College of” Agriculture and Technology, Igboora can attest to the fact that they are usually treated as very important personalities, while students’ matters are giving priority attention within the available resources.

“It is therefore not true that poor treatment was meted out to students of the institution or that the students were protesting as a result of neglect in the hand of the school management.

” With respect to amenities, it is no gainsaying that the institution has state of the art facilities for teaching and learning, while some are due for upgrading, but efforts are underway to fix such.”

The Management said the institution has up to 10 boreholes that supply water to the various departments in the college, while the health centre of the institution which was donated by the Ibarapa Central Local Government, has experienced personnel that provide medical assistance to ailing students.

“Also, the institution is connected to the national grid and generators are available at the various departments for power supply.”