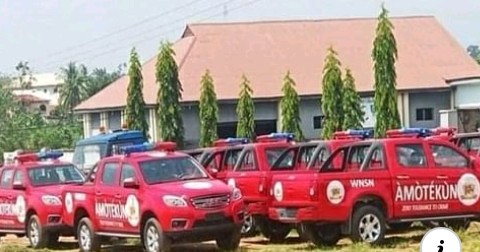 The President of Soludero Hunters, Oyo State Chapter, Nureni Ajijolaanobi has berated the ongoing recruitment of Amotekun Corps over what he termed as deliberate attempt to sideline his members. The National President revealed that Oyo State Government has jettisoned its earlier plan to incorporate some members of his association among the recruits for the Oyo State Security Network known as Amotekun.

Ajijolaanobi, while speaking with PUNCH on Friday, explained that Soludero Hunters were ready to join the corps.

He said the group had been working to defend Oyo State and the entire South – West even before Amotekun was established . He said the hunters would not stop their work even if they were sidelined.

Ajijolaanobi said the efforts of the group were parts of what led to a drastic reduction of crimes in the Akinyele Local Government Area of the state .

He said , “I heard the news on the radio and television and read it in newspapers that they have started recruiting for Amotekun. But I am surprised that they said some applicants registered claim to be our members . I can tell you that none of our members has registered.

“ If they bring forms to us, we will be part of it but if they don ’t want us , it is okay by us . We enter forests to catch criminals and everybody knows this . The Commissioner of Police gave us money once because he saw our impact.

“ The President of Yoruba World Congress , Prof Banji Akintoye , gave us one SUV and two motorcycles for patrol . We are not doing this to make money but we want to rid our land of criminals . ”