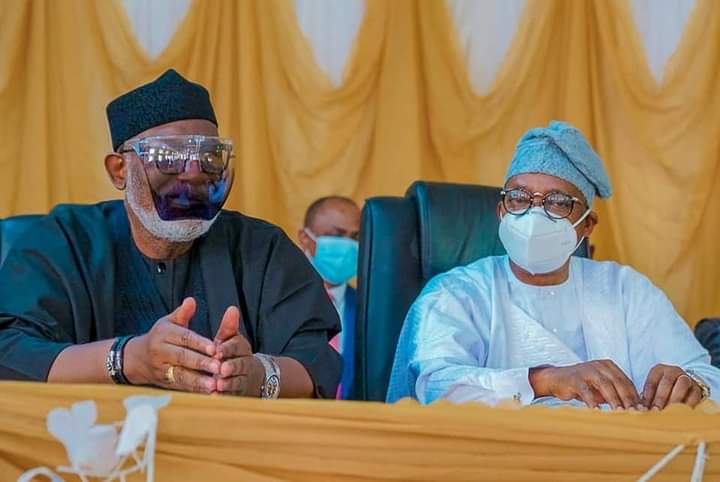 The Governor of Osun, Adegboyega Oyetola, on Wednesday swore in the newly-confirmed President of the State Customary Court of Appeal, Justice Wasiu Oladejo Akanbi.

The appointment and confirmation of Justice Akanbi are sequel to the retirement of his predecessor Justice Eunice Awolalu from service after the attainment of statutory retirement age.

The Governor tasked Akanbi to uphold judicial sanctity and discharge his duties with the fear of God, topmost sincerity and ensure fairness and equity in the dispensation of justice in the State.

He also reiterated his Administration’s commitment to continue to ensure the independence of the judiciary and champion the welfare of the judicial officers.

Governor Oyetola spoke while addressing the people at the swearing in ceremony held at the Multi-purpose Hall of the Local Government Service Commission, Abere, Osogbo.

Oyetola who described judiciary as the last hope of the common man, urged Akanbi to use judicial instrumentality to sustain the peace reigning in the State and adjudicate justice to sustain the status of Osun as the most peaceful State in Nigeria.

He also charged the new President of the Customary Court of Appeal to join his contemporaries across the judiciary family to uphold the integrity of the judiciary to demonstrate leadership with the highest level of integrity, equity, discipline and justice.

According to the Governor, the Customary Court of Appeal remains one of the custodians of the people’s customs and tradition and a formidable medium for protecting them, hence the need for it to always dispense justice to those who have suffered injustice at the lower court and to promptly dispense same in the interest of peace.

He challenged him to erect more bricks to build a stronger justice system that would deliver a better and more dignified Osun.

“The Customary Court of Appeal therefore has a duty to ensure that the customs and tradition which pertain to marriages, property ownership, inheritance and other spheres which are critical to their lives and are usually unwritten and are therefore often subject to abuse, are protected and sustained.

“As the court which has appellate and supervisory roles on these critical and sensitive matters, the Customary Court of Appeal has a huge task not only to ensure that the sanctity of the people’s customs and tradition is maintained and sustained but also to dispense justice to those who have suffered injustice at the lower court and to promptly dispense same in the interest of peace.

“The President of the Customary Court of Appeal must see a link between his job and societal peace, orderliness and development and consequently drive his court to perform its role with the highest level of responsibility and fairness to ensure justice and peace for the people.

“He must carry his subordinates along to draw strength from the Omoluabi ethos, which is the springboard of all that Osun stands for. To achieve these goals, the President of the Court of Appeal must regularly build the capacity of his staff and mobilise them to sustain the expectations of the people who see them as their last hope.

“This time calls for a courageous and forthright leadership that will provide guidance and direction to further sustain the peaceful status of the State and the integrity of the judiciary as the last hope of the common man,” Oyetola added.

While extolling the virtues and pedigree of Justice Akanbi as an incorruptible, fearless and courageous Judge, Oyetola said, “I am confident that the Judiciary will sustain its complementary role as the purveyor of justice in the state under his leadership.”

The Governor reaffirmed his administration’s commitment to continually champion the welfare and well-being of workers, particularly judicial officers in the State.

Speaking after taking the oath of allegiance and oath of office, the newly- sworn-in President, Customary Court of Appeal, Justice Wasiu Akanbi expressed profound gratitude to Governor Oyetola for finding him worthy for the appointment.

He pledged to deliver his duties with high sense of diligence, integrity and competence saying, “I promise before God and the people not to disappoint the State as I equally pledge to undertake the job professionally and put in my best to serve humanity.”