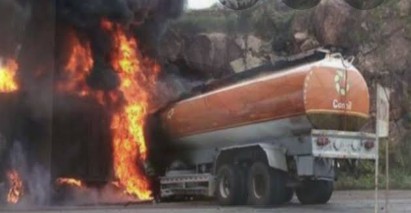 Oduduwa News has just gathered that many commuters said to have been trapped in a petrol tanker that exploded in Abeokuta the Ogun State capital on Tuesday.

ODUDUWA NEWS learnt that the tanker driving towards GTB, Kuto, Abeokuta fell and went up in flames immediately. One person confirmed dead immediately while several vehicles and motorcycles were trapped in the inferno. Details later.