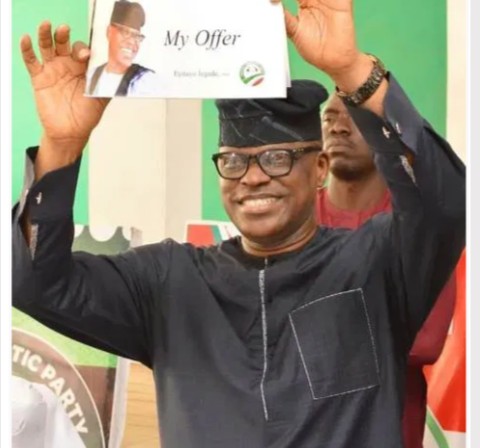 Eyitayo Jegede SAN has been declared the flag bearer of Peoples’ Democratic Party in the forthcoming Gubernatorial Election in Ondo State. The declaration was made known by the Delta State Governor, Ifeanyi Okowa who was the Chairman of the Primary election that was concluded today.

Eight aspirants sought the party’s ticket at the primary.

With his emergence as PDP flag-bearer, Mr Jegede is again the main challenger to Governor Rotimi Akeredolu, who is the candidate of the governing party, the APC.

It will be recalled that Mr Ajayi, the deputy governor, had rushed out of the APC and joined the PDP hoping to clinch the opposition party’s ticket.

His defeat now appears double jeorpardy for him as he will now have to fend off an aggressive plot to remove him from office.