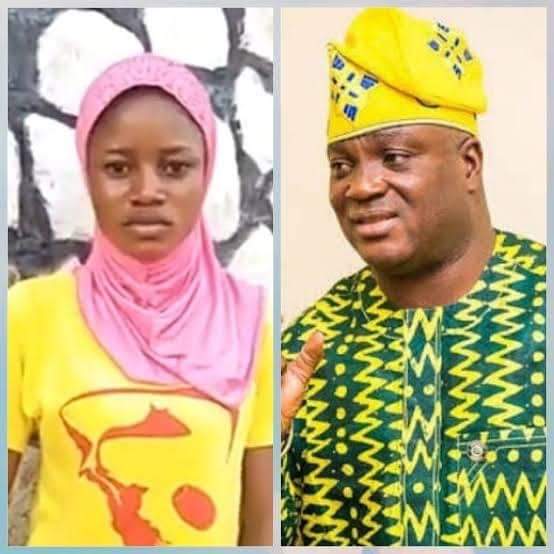 Melojeuekun Barakat Mayowa, the 16-year-old student who accused the Ogun State Commissioner for Environment, Abiodun Abudu-Balogun, of sexual harassment, has appealed to Nigerians to allow the issue to die down as her words in a video she had made on the allegations, were misconstrued, as many people misunderstood her.

The Senior Secondary School 3 (SSS111) student had, on Saturday, December 2, released a video where she accused Abudu-Balogun of attempting to rape her in the guise of helping her financially.

In the video, Mayowa had said, among other things:

“When Abudu-Balogun came into the room, he locked the door and put the key inside his pocket. He asked about my school and I said Victory Model College. He said how much is my school fee, I said N30,000. He asked who pays it and I said my daddy.

“Hon Abudu-Balogun now moved closer to me and pressed my breast. I moved away from him. He said won’t I cooperate, and I replied by saying why will I cooperate. He now started pressing my breast, pressing my body and harassing me, something like that. Then, I was struggling to free myself from him to get freedom.

“He started reciting some incantations and wanted to place his hand on my head, I now moved away his hand and said nobody touches my head. He wanted to force me into his room, but I struggled with him and started shouting.”

The video had drawn the anger of Nigerians who called for the dismissal of the Commissioner as well as his prosecution.

On his part, Abudu-Balogun swiftly released a statement debunking the allegation, saying it was the handiwork of his political enemies who wanted to tarnish his image.

“My attention has been drawn to a purported video circulating on social media of a girl alleging that I attempted to sexually harass her,” the statement read.

“On this said day, the girl was brought to my house by one of my loyalists who is her uncle, to assist her to get a job as a Computer Operator at the ICT Centre I facilitated while I was serving as a member of the House of Representatives years back which has been moribund

“I met her at my sitting room for a few minutes where many of my loyalists are, people that came to visit me for the New Year. I chatted with the lady for few minutes and as part of my usual gesture, I gave her some amount of money for her transportation.

“A day after, I was informed by some people that I have been alleged to have attempted to sexually harass the girl and I should invite the family for a meeting so as to settle the matter amicably.

“It was after my refusal to yield to their threats that they went ahead to make a teleguided video leading the lady on what to say to implicate me. This is purely a political blackmail by my adversaries.

“Let me state emphatically that I never attempted to sexually harass anyone.”

But his explanation did not hold water with the state government as Governor Dapo Abiodun promptly suspended him while ordering the police to carry out an intensive investigation into the allegations.

However, the teenager made another video on Sunday, which seems to hint at a possible recanting of the earlier allegations she made on Abudu-Balogun.

In the new short video, Mayowa pleaded that Nigerians should allow the matter to rest as she and her family were not ready to drag issues with the commissioner.

While thanking and appreciating Nigerians for standing up for her, Mayowa said:

“I want to use this opportunity to appeal to meaningful Nigerians to please allow this matter to rest. We don’t want to drag issues with the commissioner.

“The former video I made, many people misunderstood it, so please you should allow the matter to rest.”