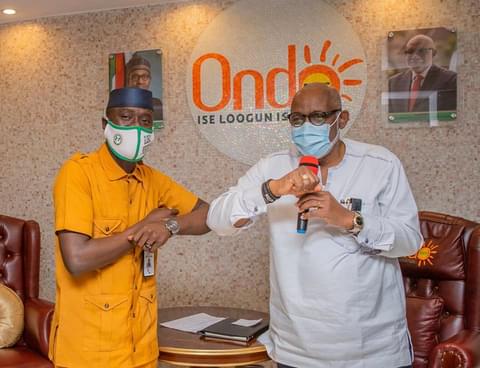 The National Association of Nigerian Students (NANS) has declared its support for the Ondo State Governor, Arakunrin Oluwarotimi Akeredolu SAN, stating that his performance across the state is impressive.

The student body led by its President, Comrade Danielson Bamidele commended the gaint strides recorded across the various sectors of the state by the Akeredolu administration.

The leadership of NANS spoke on Wednesday evening during a courtesy visit to the Governor’s office , Alagbaka , Akure , the state capital.

The student body leadership led by its President has been in the state for three days, where they have embarked on inspection and monitoring of the Governor’s projects.

Speaking, the former Senate President of NANS, Olalekan Smart Edward said Governor Akeredolu’s projects are speaking for him within and outside the state.

In his remarks, the NANS President, Comrade Danielson Bamidele said the national delegation of the student body has been in the state for three days for inspection and monitoring of the Akeredolu administration projects, adding that the Governor has done creditably well.

He described the road projects executed by the Akeredolu administration as quality, stressing that that Governor has embarked on enduring projects.

The NANS President appreciated Governor Akeredolu for his interventions at the Olusegun Agagu University of Science and Technology, Okitipupa (OAUSTECH) which he said, has turned the school around for good.
He equally appealed to the Governor to reconsider the tuition payable in the state owned institutions in the state.

Responding, Governor Akeredolu who said students are important to his administration, disclosed that he had instructed his team to find out the tuition payable in other state owned institution so as to know what step to take on the reduction of tuition in the state.

“Unlike somebody that decided not to pay for seven months. I met seven months salary arrears and I have paid six. So I prioritized the workers’ welfare. We shored up our IGR to spend more on infrastructure. I note what you have raised on this issue of fee.

“At my last meeting, I have said let me have where they are paying less than what we charge here. What we found out was that for those newly admitted, we still charge the lowest in tuition but for the second year and all, we have state owned institutions that charge lesser then us. And if not for this issue of Covid, we have decided to reduce it. We will reduce it.