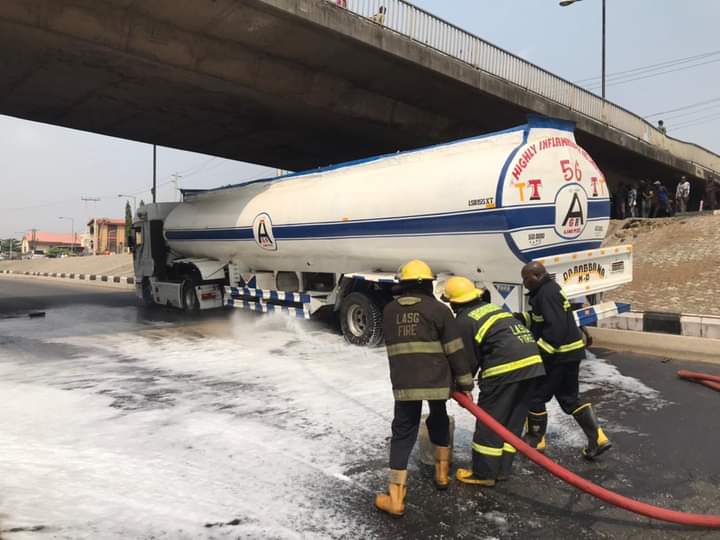 The Lagos State Emergency Management Agency (LASEMA), in collaboration with the State Fire Service and other emergency first responders, prevented what could have resulted in a fire outbreak at Ogudu, when operatives of the Agency salvaged an oil spilling Iveco Truck with registration number LSD 155XT, loaded to capacity with 50,000 litres of Premium Motor Spirit (PMS) at Ogudu under bridge inward Alapere.

Speaking on the incident, the Director-General/CEO of LASEMA, Dr. Olufemi Damilola Oke-Osanyintolu, stated that the quick deployment of the agency’s Tiger Unit and the intervention of the State Fire Service prevented the ignition of fire with effective blanketing.

According to him, “The tanker had a leakage in one of its compartments which resulted in oil spillage on the road. The quick recovery of the oil tanker was made possible when the leaking compartment was repaired and the spillage was effectively stopped, enabling the truck to be moved safely off the road to a layby”.

“The timely recovery of the leaking tanker effectively eased the build-up traffic gridlock, which had been managed by the control mechanism put in place, with the diversion of traffic away from the hotspot by combined efforts of LASTMA, LNSC and RRS”, he added.

Oke-Osanyintolu, however, advised residents to exercise extreme caution in the area due to the highly flammable nature of the product, while encouraging motorists to use alternative routes where possible.