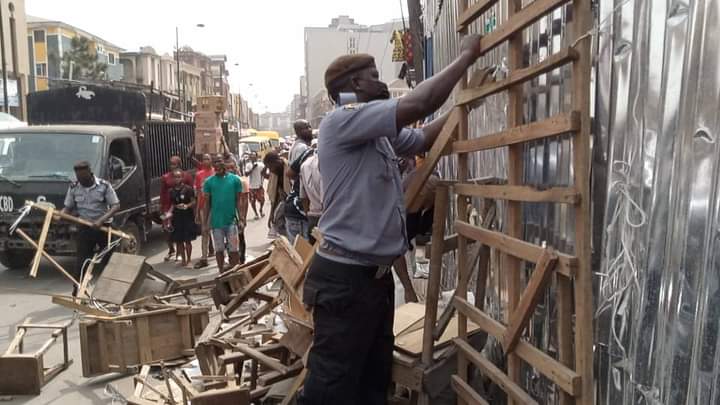 The Office of the Special Adviser to the Governor on Central Business Districts, on Tuesday, embarked on the removal exercise of illegal structures and makeshift shops erected on walkways, road medians and drainage alignments as well as indiscriminately parked vehicles on roads within the Lagos Island Business District.

Olarenwaju said the antics of commercial bus drivers, commercial motorcyclists, shop owners and roadside sellers will not deter the government from transforming the entire Lagos Island axis into a world-class business and tourism hub, stressing that the Governor Babajide Sanwo-Olu led administration is very passionate about sustaining the environment and ensuring the free flow of traffic across the State.

“The gross abuse and flagrant disrespect for traffic, environmental and urban planning laws by roadside sellers, commercial motorcyclists and bus drivers, who pick and drop passengers in unauthorised places, mechanics and street traders on the Island can no longer be tolerated. We are working with relevant agencies of government and trade unions, especially NURTW and leadership of market associations to check these illegalities,” the Special Adviser said.

While warning street urchins and miscreants parading themselves as “Omo-Onile” and are in the habit of allocating parking spaces to motorists to desist, the Special Adviser maintained that no amount of resistance and intimidation would make the government stop the clean up of the entire Lagos Island Business District in line with the vision of making Lagos a 21st-century economy.

“We will continue to impound vehicles contravening the Lagos Traffic Law within the business district. The removal of shop extensions built on walkways and drainage alignments as directed by the Governor is already in progress. I call on residents and business operators to assist in sustaining the gains of the exercise while the government continues with its advocacy and public enlightenment”, he asserted

Oyerinde revealed that vehicles and motorcycles impounded in the cleanup exercise will be arraigned at the Lagos State Special Offences Mobile Court for adjudication.