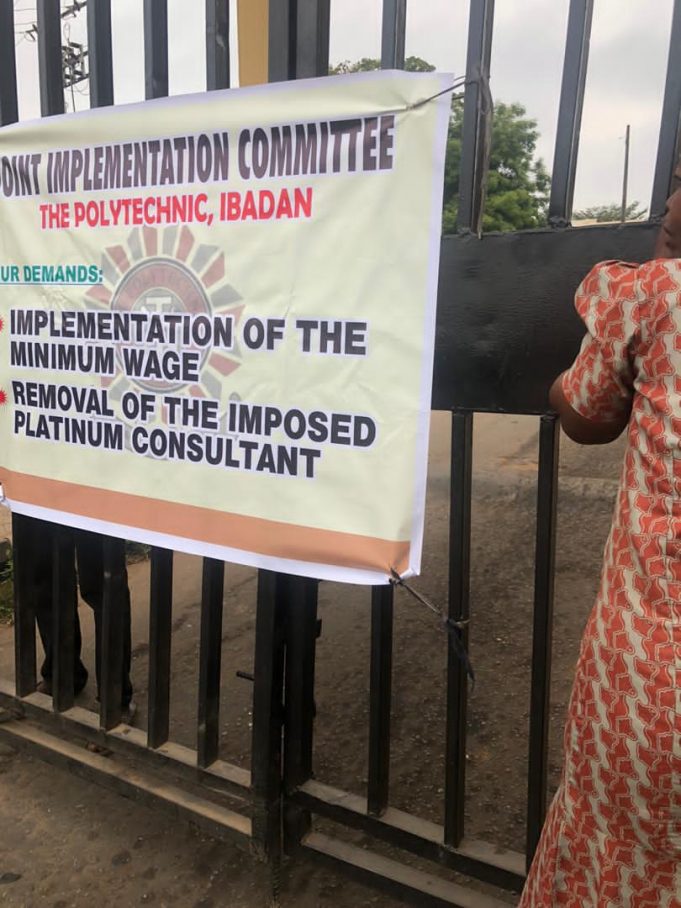 ODUDUWA NEWS has just gathered that staff members of Polytechnic Ibadan have embarked on strike action over non implementation of minimum wage.

The resolution to embark on strike action was reached at the meeting held by joint action committee of academic and non academic staff.

The Chairman of SSANIP, Abiodun Abegunde in his opening remarks commended the workers for their steadfastness so far and noted that the issue must be fought to a logical conclusion. He noted that different efforts have been employed to resolve the impasse to no avail. He noted that the wage structure being demanded by the Unions is even lower than that being enjoyed by sister institutions in other states.

The Chairman of NASU, in his submission, noted that the Governing Council itself was incapacitated by the overreaching activities of the Consultant. He wondered why the management was willing to follow a directive from the NBTE to lock down the school, but unwilling to implement the wage structure approved by the same NBTE

The representative of academic staff, Nurudeen Akinade noted that the activities of the consultant is a clear negation of the edict setting up the institution and asked that such be rejected outrightly. He noted that no form of sabotage would prevent the achievements of the demands.

Workers who spoke at the meeting agreed that they had endured enough and it seemed the state government had taken their patience as cowardice.

A motion for a strike action was thereby moved and seconded. It was emphasized that the strike was total and comprehensive, and no worker is exempted as essential services, till the government accedes to the demands.