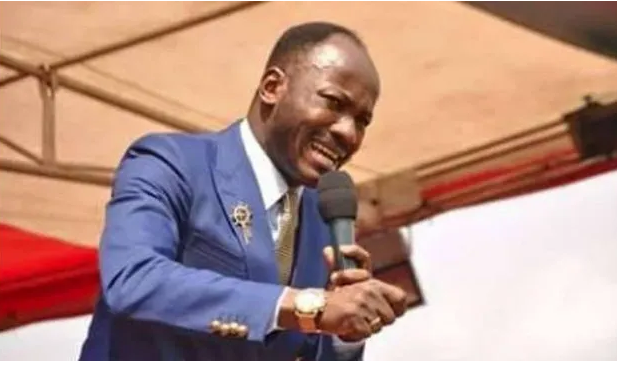 The General Overseer of Omega Fire Ministries International, Apostle Johnson Suleman, is under probe ordered by the the Inspector-General of Police, Mohammed Adamu, for allegedly sleeping with the wife of Pastor Mike Davids, threatening his life and denying him access to his children.

Pastor Faith Edeko is the lady Apostle Suleman is accused of sleeping.

Edeko oversees the Abuja branch of Omega Fire Ministries in Utako, while her husband, Pastor Davids, has left the church.

Adamu conveyed the order in a letter addressed to the Deputy Inspector-General of Police, Force Intelligence Bureau, Garki, dated January 5, 2021.

The letter, with reference number CB:7000/IGP.SEC/ABJ/Vol.515/561, was signed by the Principal Staff Officer II to the Inspector-General of Police, ACP Iliya Doma.

The letter is sequel to a petition written by V.C Ezenagu & Associates on behalf of the aggrieved Pastor Davids who accused Apostle Suleman of threat to life and preventing him from seeing his three children.

The police letter is titled, ‘Re: Criminal Petition Against Apostle Johnson Suleman for Enticement of a Married Woman; Adultery; Unlawful Criminal Restraint to Access Children and Threat to Life’.

The letter reads in part, “I attach herewith a copy of a letter dated December 30, 2020 with its attachments received from V.C Ezenagu & Associates on the above underlined subject. The Inspector-General of Police directs that you treat. Accept the assurances of my esteemed regards please.”

In the petition he sent to the IG, Davids said he met Apostle Suleman in 2003 while he was in school. He said they became very close and he was eventually ordained a pastor of Omega Fire Ministries on June 9, 2006 by Apostle Suleman and served the church for over 15 years before his exit in 2019. He attached his pastoral certificate with licence number 125 to the petition.

In three videos posted on Instagram on Sunday, the aggrieved pastor accused Suleman of sleeping with his wife and destroying his marriage.