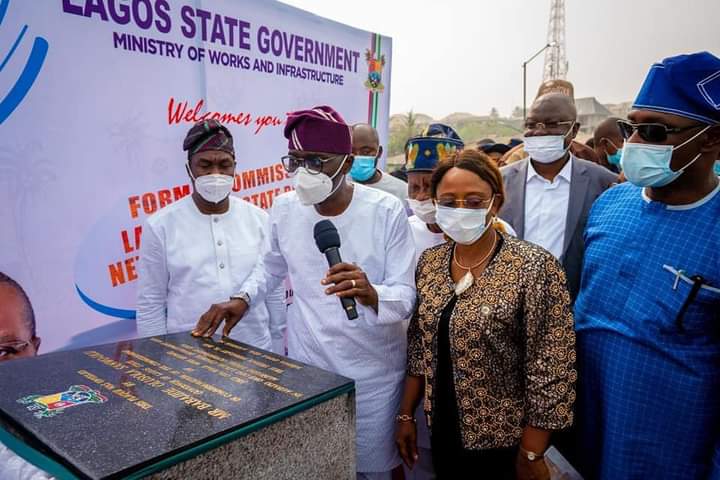 In fulfillment of the promise to complete all outstanding projects inherited by his government, Lagos State Governor, Mr. Babajide Olusola Sanwo-Olu on Friday commissioned a network of four roads in Agbado-Oke Odo LCDA in the second phase of the Lagos/Ogun State Boundary road projects.

Speaking during the commissioning, Sanwo-Olu expressed satisfaction at the quality of the job done on the road projects, noting that the construction of Lagos-Ogun State Boundary Roads in Alimosho Local Government Area was in recognition of the need to improve connectivity within Alimosho LGA and neighbouring State communities, thereby reducing travel time, loss of man-hours as well as boosting trade, commerce and investment opportunities in the area.

The Governor said, “Having realised the critical importance of road infrastructure to the opening up of the State, our administration, in accordance with the T.H.E.M.E.S Agenda, especially the Traffic Management and Transportation Pillar, decided to demonstrate the attendant impact of road infrastructure on business and commercial activities, welfare and productivity of the people”.

“The delivery of this road will boost trade, promote commerce and investment opportunities for our people. Consequently, the construction of Phase II was necessitated by the need to complement the Network of 21 roads and two Bridges executed in Phase I and abate perennial flooding in this axis”, he added.

Sanwo-Olu stated that the commissioned network of roads, apart from being capable of boosting the economic activities of both communities in the two States, was in direct response to the urgent need to provide an alternative route to Lagos-Abeokuta Expressway to reduce constant traffic bottlenecks often experienced on the highway due to bad road and commercial bus activities.

“The newly reconstructed roads, which are parallel to Lagos Abeokuta Expressway, is a functional alternative as motorists can now connect Ota from Abule-Egba-Ekoro through this network of roads. Without doubt, these projects provide massive connectivity, shorten distance, improve travel time, reduce the man-hour loss in traffic and the stress of commuting along the Expressway” he enthused.

He explained that the brief for new road projects entailed creation of new road alignment and expansion of existing pathways, including massive earth movements and relocation of public utilities such as water pipes, electric poles and transformers within the Right of Way, to achieve the road linkage.

Commending traditional rulers and other community leaders for coming out en-mass to receive him, Sanwo-Olu urged them to take ownership of the roads by enduring adequate and regular maintenance and prevent them from any form of abuse or misuse, reminding that public infrastructure is provided with taxpayers’ money.

His words: “As beneficiaries, we must note that adequate and functional maintenance of the provided road is the responsibility of not only the Government but the Society at large. We will continue to collaborate with the community both at the Local Government and CDA levels to promote and develop local initiatives for the community to participate in the maintenance”.

“Let me use this opportunity to urge you to refrain from such acts that could undermine the durability of the road. We know we can stem down and reduce the rate of theft of electrical cables and careless damage of the road. The road was provided from yours and other taxpayers’ money which could be used to provide other projects for other communities”, Sanwo Olu stated.

Earlier in her welcome address, Special Adviser for Works and Infrastructure, Engr. Aramide Adeyoye, noted that Agbado Oke-Odo is a settlement with a fast-growing population, thus requiring infrastructural upgrade and renewal.

Adeyoye disclosed that the Governor had during the commissioning of a network of 31 Strategic Roads in Ifako-Ijaye, a year ago, directed the Ministry of Works and Infrastructure to speed up the completion of the Lagos-Ogun State Boundary Roads Phase II, adding that the commissioning of the Phase II of the projects were in line with the quality service delivery of the State Government.

According to her, the commissioning of Lagos/Ogun State boundary road projects are a demonstration of the commitment of the Governor Sanwo-Olu-led administration to improve the quality of life of the residents and economic growth of the State.

She promised that her Ministry would work harder to deliver quality road infrastructure in line with the T.H.E.M.E.S. agenda and the Greater Lagos Vision of the State Government.

Also present at the commissioning was the Deputy Governor, Dr. Obafemi Hamzat, members of the State Executive Council, top officials, community leaders and other stakeholders.