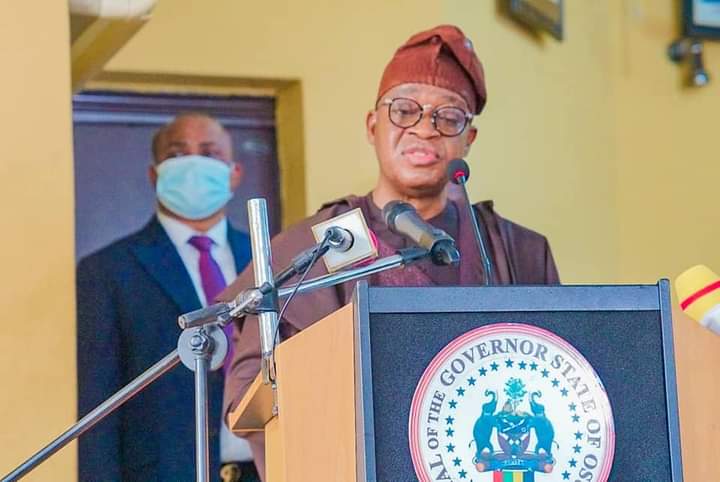 Oyetola to parents: Give your children quality education, inculcate Omoluabi virtues in them

The Governor of Osun, Adegboyega Oyetola, on Sunday charged parents and guardians to prioritise the welfare of their children and wards by giving them quality education.

He called on parents to see beyond the present and inculcate Omoluabi virtues in their children, saying this would guarantee a better future for them and secure peace of mind for parents at old age.

This is even as the State Chairman, Nigeria Union of Journalists (NUJ), Osun State Council, Comrade Wasiu Ajadosu, held a fidau prayer for his late mother, Alhaja Rafatu Ajike Ajadosu.

Governor Oyetola who was represented at the occasion by his Special Adviser on Education, Alhaji Jamiu Olawumi, advocated the need for parents to train their children on the path of godliness and selfless service to humanity.

According to him, an entity that lives a fulfilled life is one whose life is full of promising children that live worthy lives after his or her demise.

Governor Oyetola therefore urged parents to always look after the education of their children and give them the best that life can offer.

“It is incumbent on every parent to take good care of his or her children. Our presence here today is a reflection to the fact that the deceased took care of her children.

“As we can see and hear from people while giving testimonies on who the deceased was, she was a good mother who welfare of her children took topmost priority.

“If Mama was not a good mother, we won’t be here today and for a Governor to be at a function like this, it is an indication that the deceased left behind worthy children.

“So, the lesson to take home from here is to take good care of our children and secure a better future for them. By so doing, our future is guaranteed.

“We pray Allah to grant the departed soul the best place in paradise and grant the worthy children she left behind the fortitude to bear the irreplaceable loss, because no matter the age of one’s parents, no one prays for their death.”

The Governor therefore extolled the deceased for the great impact she made on her children while alive as reflected in the quality of the bereaved.

In his remarks, the State Chairman, Nigeria Union of Journalists, Osun State Council, Comrade Wasiu Ajadosu, lauded the good legacies left behind by her late mother.

He described the deceased as a mother par excellence whose passion for the welfare and well-being of her children and relations was second to none.

Ajodosu who beseeched Allah for the peaceful repose of her mother’s soul, said, “Indeed, the good deeds of my mother while alive would serve as respite for her wherever she is in heaven.

“My mother was a wonderful woman; she was humility personified. She was generous, courageous and religious. She was full of determination to achieve greatness. She inculcated in us good virtues and taught us that good name is better than gold or silver.

“We shall continue to sustain her legacies and uphold all she taught us while alive,” Ajadosu added.

He expressed gratitude to Allah over the peaceful and glorious exit of her mother, just as he appreciated the presence of all, particularly Governor Oyetola, for attending the prayer session.

Earlier in his sermon, Sheikh Muhammed Jamiu, urged Muslim Ummah to dedicate their lives to serving Allah and humanity.

He called on them to use their wealth and energies to impact meaningfully on the lives of fellow human beings, saying worldly things are ephemeral.

While lauding the virtues of the deceased, the Islamic cleric said the departed soul had justified the essence of life before she died as seen in the quality of her children.

The occasion was attended by well-meaning Nigerians among whom are: the Field Commander, Amotekun, Comrade Amitolu Shittu; a renowned human rights activist, Comrade Waheed Lawal; Publicity Secretary, All Progressives Congress (APC), Barrister Kunle Oyatomi; Former Osun Commissioner of Information, Mr Sunday Akere; and members of the press, among others.