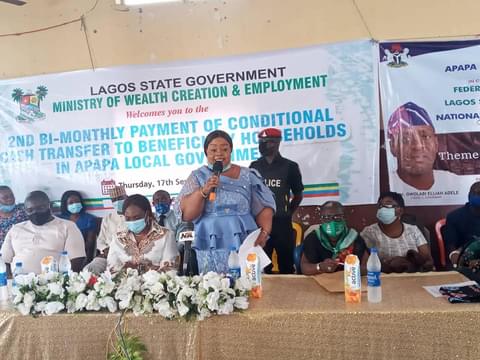 The Federal Government, in collaboration with the Lagos State Government, has commenced the payment of Conditional Cash Transfer to another set of beneficiaries in Apapa area of the State for the months of July and August 2020.

Speaking at the second edition of the disbursement of the Cash Transfer to the beneficiaries in Apapa Local Government Area of the State on Thursday, the Honourable Commissioner for Wealth Creation and Employment, Mrs. Yetunde Arobieke, acknowledged the efforts of the Federal Government for extending the gesture to Lagos State and its consistency in making the monthly payment accessible to indigent Lagosians.

Arobieke noted that the process of enrolment of about 6,810 households captured by the State Cash Transfer Office (SCTO) was approved by the Governor and commenced in April to fast-track the conditional cash transfer to beneficiary households in order to alleviate the sufferings of the poor and vulnerable.

While noting that the beneficiaries were validated based on the completion of the enrolment exercise and issued identification cards by the National Cash Transfer Office (NCTO), the Commissioner disclosed that the payment process would be conducted in the 30 wards of the six targeted Local Government Area, namely Apapa, Amuwo Odofin, Epe, Ibeju-Lekki, Badagry and Lagos Island Local Government Areas.

She reiterated that the sum of N10,000 for the months of July and August 2020 will be paid to each beneficiary household, through the designated household caregiver, who will, in turn, utilise the money for the better living of the household.

“I will like to appeal to Lagosians that this is a continuous exercise and in case you are yet to be captured in this batch, there are more opportunities that would be cascaded to the rest of the Local Government Areas in the State”, Arobieke assured.

In his remarks, the Executive Chairman of Apapa Local Government Area, Mr. Owolabi Elijah Adele, expressed gratitude to both the Federal and Lagos State Governments for extending the gesture to the local level and for elevating the standard of living of indigent residents in the council area.

Recall that the Household Uplifting Programme (HUP), otherwise known as Conditional Cash Transfer, an initiative of the Federal Government geared towards the distribution of resources to the vulnerable population including the aged and physically-challenged was officially flagged off at Amuwo Odofin Local Government Area of the State a few months ago.