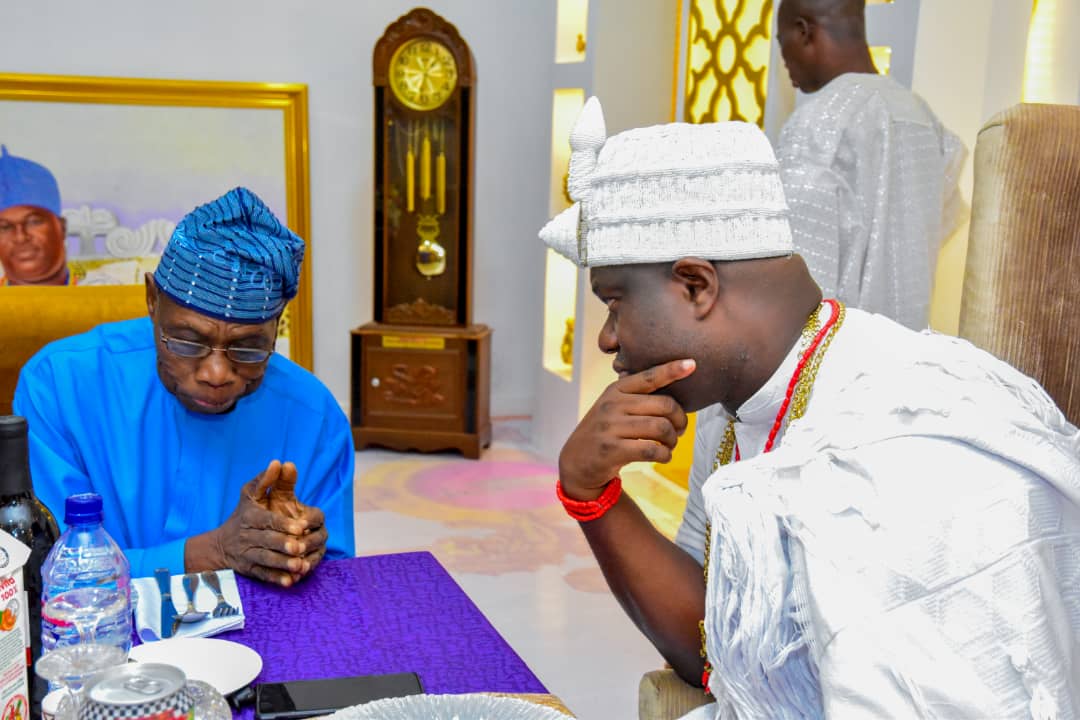 The Arole Oduduwa & Ooni of Ife, Ooni Adeyeye Enitan Ogunwusi Ojaja II, on Monday played host to former President, Chief Olusegun Obasanjo at his Ile Oodua Palace, Ile-Ife, during which he appealed to the youths calling for the cancelation of the disbanded Special Anti-Robbery Squad of the Nigeria Police to retreat.

Ooni Ogunwusi who described the #EndSARS struggle as Nigerian youths clear message to the government, particularly about their ability to get things done in a coordinated manner, urged the youths to allow the government to fully attend to their yearnings.

“If you look at the #EndSars protest, you will see that our youths have what it takes to rule the country. Since day one, they have shown leadership, accountability and huge sense of responsibility which have sent a clear message to the government.

“As a youth leader myself, I am proud that we all have communicated our ideas and it is heartwarming that we have been heard.

“Dear youths, it is time to retreat particularly to prevent those with ulterior motives from hijacking the peaceful message of peace. The whole world is aware of our peaceful conduct and we must not let some bad elements tarnish this enviable integrity.

“Once again, I wish to urge our youths to stop the protest for now and give peace a chance. This would disallow the government from using force.” Ooni admonished.

Earlier in his speech, former President Obasanjo explained that the #EndSARS protest is a product of an extensive agitation of the Nigerian youths that needed to be attended to by the government.

“Over 65 percent of our population are under the age of 35 who look up to the best in life who struggle for education, some of them didn’t even get educated while those who are educated get frustrated because of lack of opportunities. We must realize that the lid on the boiling steam would have to be removed.

On the attack on Governor Gboyega Oyetola’s convoy by some suspected political thugs at the venue of an #EndSARS protest in Osogbo, the Ooni who is the permanent Chairman of the Osun State Council of Traditional Rulers, described the incidence as unfortunate.

“It is sad and we cannot but condemn it as it is against the ethos of Omoluabi which we portray in Osun.

“Similarly, I want to commend Mr. Governor for his maturity in handling the sensitive issue despite all provocation. It shows him as a father that he is, may God continue to protect him.” The Ooni said.