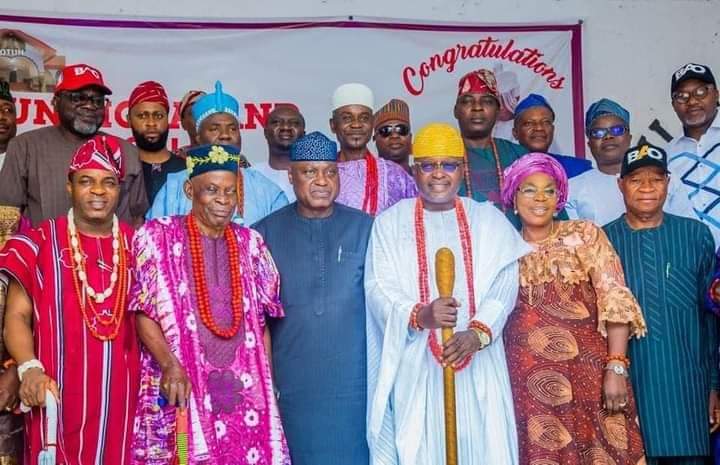 The Oore of Otun Ekiti and paramount ruler of Moba kingdom, HRM Oba Adekunle Adeayo Adeagbo, has described the decision of Ekiti State Governor-elect, Mr Biodun Abayomi Oyebanji, to embark on a ‘thank you visit’ to palaces after his victory at the polls, as unprecedented in the history of the State.

Oba Adeagbo, alongside other traditional rulers from Moba Local Government received Oyebanji, his Deputy, Chief(Mrs) Monisade Christianah Afuye, State Chairman of APC, Barrister Paul Omotoso and other party leaders on Tuesday and prayed for the success of the incoming administration.

The royal father extolled the good virtues of the Governor-elect and lauded him for his act of gratitude.

“We are extremely excited for your act of gratitude which shows the kind of person you are. Though, I am not too surprised with this good step you have taken. It has further affirmed the ‘Omoluabi’ trait in you. With this, you have simply shown that you have passion for Ekiti State. We are not in doubt that your tenure in office would be spectacular”

Similarly, the Olojudo of Ido-Ekiti, Oba Ayorinde Ilori-Faboro, who spoke on behalf of other Obas in Ido-Osi Local Government expressed same feeling and admitted that the Governor-elect has taken an entirely different step.

“We are happy that the people of Ekiti voted for you. Your amiable personality won you the election. We are having for the first time one of the agitators for the creation of Ekiti State as Governor-elect and that makes the difference.

“You are part of bolt and nut that brought this state together. Beyond that, this is the first time a Governor-elect would deem it fit to say ‘thank you’ for the favour done him,”

All the traditional rulers present at the meeting venue unanimously agreed that the step being taken by the Governor-Elect is a genuine step and at the right time.

Earlier, Oyebanji had restated his commitment to prioritize the welfare of the traditional rulers in his administration as well as according them their due respect.

Oyebanji acknowledged the great role played by the traditional rulers during the struggle for the creation of Ekiti State which, according to him, placed them as critical stakeholders in Ekiti state. He promised to engage them from time to time and incorporate them in his administration.

Speaking at another forum attended by community leaders, market women, politicians and the neutrals in the local governments visited, Oyebanji said his administration would assist promoters of small scale businesses and artisans in the area of funding. He also promised to tackle the issue of insecurity that have been one of the major challenges facing the state.

He called for unity among party leaders and members of the All Progressives Congress in Ekiti state, pointing out that any leader or member creating faction within the party is not doing the party any favour.

“Any leader that is promoting factional groups is not doing well for the party. I know no any other faction than APC and my loyalty is to the entire state because I’m governor for all. Therefore, I urge you to give way for unity and peace in the party and in the State” he added.