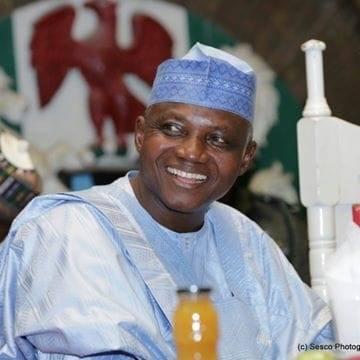 In reaction to the recent statement credited to the erstwhile president of Nigeria, Chief Olusegun Obasanjo where he said President Muhammad Buhari has greatly succeeded in disintegrating Nigeria.

Meanwhile, the Senior Special Assistant to the President on Media and Publicity, Garba Shehu has reacted to Baba Obasanjo’s comment in a statement made available today to the newsmen titled: “Obasanjo is Nigeria’s Divider-in-Chief.”

He likened the statement credited to Chief Obasanjo as an attempt to destabilize Nigeria particularly at a time Buhari is putting all necessary measures in place to further strengthen peace and harmony currently enjoyed by Nigerians under his administration.

“The difference is clear. From the lofty heights of Commander-in-Chief, General Obasanjo has descended to the lowly level of Divider-in-Chief (to adapt the coinage of Time).

“Before responding further to the unfair attacks on President Buhari and his administration by the former President, it is important that we categorically state that contrary to the assertions by a few analysts, the recent speech in which President Buhari advised West African Presidents against tenure elongation beyond constitutional limits has been consistent with his long held views on the need to adhere to the rule of law.

“Even though he tried it and failed, the recent uptick in the number of such leaders proposing to do, or actually carrying on in office beyond term limits is sufficient to cause concern among democrats in the sub-region given its prospects of destabilizing the states and the region.

“President Buhari’s advocacy is consistent with his principles and in line with the current policies of his administration and indeed that of the ECOWAS Charter which is that term limits must be respected and that the change of government is only permissible through the ballot box.

“Having cleared this misperception, we hope that Chief Obasanjo would once again sheath the sword and rest the pretentiousness about the Messiah that has (mis)led him to pronounce often wrongly, as he disastrously did in the 2019 elections, about the life and death of Nigerian governments.

“As some commentators are already suggesting, Chief Obasanjo should, in accordance with his mantra as a statesman, get involved with problems solving, when and where they exist instead of helping the mushrooming of a poisonous atmosphere of ethnic and religious nationalism.

“Surely, he must have disappointed many of his local and foreign admirers by showering commendations on a few extremist groups who have vowed to shun the invitation to the National Assembly to participate in the process of constitutional amendment.

“No doubt, he must have left those admirers confused in announcing the support for the boycott of a democratic process of changing the constitution, at the same time calling for dialogue and engagement.