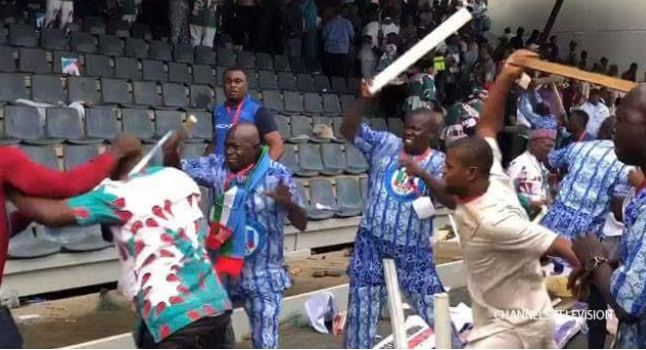 The ongoing membership registration exercise of the All Progressives Congress (APC) in Oke-Ogun area of Oyo state was turned ugly, as party members engaged in a free-for-all over substitution of names.

According to newsmen, Party members, who were present at the centre in Oke-Ogun, said several persons were injured and had to be taken to the hospital for treatment.

A former council chairman in Oke-Ogun was also reportedly stripped naked and beaten by members of a rival party faction.

It would be noted that directives from Abuja have been issued for the dissolution of all factions like the late Senator Ajimobi faction (SENACO), Lam Adesina group, called Lamists; the African Democratic Party group, and the Peoples Democratic Party returnees to promote ones within the party.

However, a source who preferred anonymity, alleged that loyalists of the immediate past governor of Oyo, late Abiola Ajimobi, led by a former commissioner, attempted to substitute names of committee members, who are expected to supervise the registration exercise in all local government areas, with persons from other camps within the party.

Meanwhile, when the state police public relations officer, Olugbenga Fadeyi, was contacted for confirmation, he said the command has no knowledge of such incident.

Also, efforts to reach the Oyo APC director of media and strategy, Abdul-Azeez Olatunde, was not successful, but a prominent member of the party in the state, who also preferred not to be named, corroborate the earlier accusation.