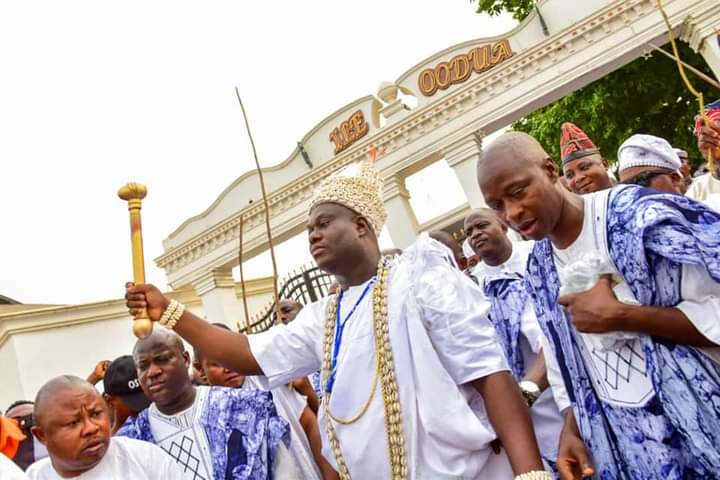 The Arole Oduduwa & Ooni of Ife, Ooni Adeyeye Enitan Ogunwusi Ojaja II, has charged the Federal and state governments to direct economic policies and other laudable programmes at the entire citizenry.

Ooni Ogunwusi, the Co-Chairman of National Council of Traditional Rulers of Nigeria(NCTRN) gave the charge during the 2021 edition of the annual celebration of Aje Festival at his Ile-Oodua palace, on Monday in Ile-Ife globally accepted ancestral home for Yoruba race and all the descendants of Oduduwa home and abroad. .

The Ooni who lauded Muhammadu Buhari-led Federal Government over several economic programmes and policies like the, recent employment of 774,000 Nigerians across the country and other interventions also advised the government to do more for the Nigerian masses by using cultural tourism as a veritable means for economic revolution.

“For us to progress as a country, we must ensure that our wealth goes round especially to the poor and other vulnerable members of the society. We cannot keep having strikingly rich few Nigerians and uncountable ones wallowing in abject poverty. To do this, the government must look at cultural tourism as a veritable tool for revolutionizing the economy before its too late. The Ooni decried.

While explaining the basis for the Aje Festival celebrations, the African foremost monarch who is also the Natural overall father for the Oodua race worldwide explained that it is a unique way through which the Yoruba people globally remember the deity which is known for wealth and riches.

“Aje is a deity which is known for wealth and riches. Its annual celebration as you have witnessed today is to acknowledge its relevance to us as people, especially its indispensable nature to us.

“Did you see the struggle for it during the procession to and from the Aje temple? That is the spirit of Aje, all of us are not rich because it is not easy to accumulate wealth.

“We are not devaluing the currency by spraying it to our people, we only do it on a special day like this to spread happiness. In the olden days, it was cowries, sometimes ago it was coins, nowadays it is naira notes and we hold it in a very high esteem.” The Ooni noted.

Coordinator of the annual Aje Festival, Princess(Dr) Oluwatoyin Kolade expressed happiness for the massive turnout of participants from within and outside Nigeria without even pre publicity. Toyin Kolade, the Ilesa born international trader and great philanthropist gave all credit to Ooni Ogunwusi for the opportunity given her to contribute to cultural development of the Oodua race, pledging her continued loyalty and commitment to the development of the prestigious Yoruba cultural heritage.

“My father the Ooni is loaded with productive dynamism and great innovations for our race and African continent as a whole, especially in the area of cultural tourism revolution. He appointed me as his cultural ambassador in charge of Aje festival 4 years ago and with his unflinching support I have so far enjoyed, this Aje festival which was merely a local affair before 5 years ago has today become one of the important Nigeria cultural festivals with participants from all over the world. This Ooni is God sent, Wallahi!! “. Toyin Kolade said.

The Oore of Otun-Ekiti & Paramount Ruler of Mobaland, Oba Adekunle Adeagbo, Ajero of Ijero-Ekiti, the Obaro of Kabba Oba Joseph and Onisale of Isale who led the delegation from Republic of Benin were among the traditional rulers joined other dignitaries including Nollywood stars like, Iya Rainbow, Lanre Hassan (Iya Awero) and others to witness the event while the Fuji music maestro, Abass Akande (Obesere) thrilled the guests.

AJE OLOKUN the goddess of wealth is among the loved ones out of the 401 deities(Irunmoles) that formed the first dynasty of mankind known as Ife Oodaye. These deities are still being celebrated in lle-lfe and globally till date.

The main capacity and strength of the goddess of wealth is to provide sufficient wealth and greater economic benefits for whoever worships the Almighty God through her.

AJE can be found everywhere; waters, air, land, trees, fire, etc. It is a deity synonymous with cowries which were being spent globally before the advent of present currencies.