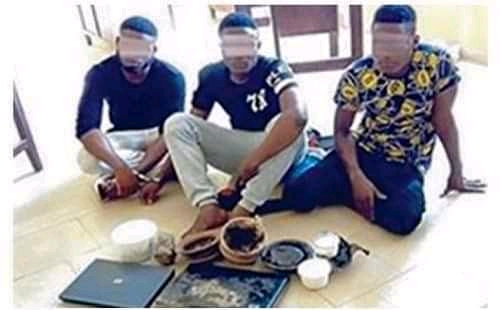 A Twitter user @ikhuoria_ has narrated how his girlfriend broke up with him because he did not agree to become a yahoo boy.

According to him, his girlfriend bought him a laptop and modem as seed capital for him to start ‘yahoo’, because his monthly income was too small.

@ikhuoria_ refused and his girlfriend threatened to dump him over his refusal to become a yahoo boy. He initially thought she was bluffing and was surprised when she packed all her things out of his house including the birthday present she bought for him.

“I remembered when i was dating this girl she bought me a gift on my birthday, when I opened it i saw a laptop and a moderm. I was surprised when I saw them. I had to ask her who are they for? She told me the reasons she bought them for me is becos she’s not happy with my salary and also I should start doing Yahoo (scam) I told her I can’t do it she said if I didn’t do it she will end the relationship. To my surprise, she packed all her things out of my house including the birthday present she bought for me”

This is one of many reasons why young men choose to engage in fraudulent activities as they feel it is a means to overcoming poverty and please the people they love.

‘Yahoo Yahoo’ which is an acronym for internet fraud has in recent times gained popularity in Nigeria as it is seen as a short cut to gaining financial dominance.

This has also given security agencies more work to do as they seek to sanitize the society and the entire country from this ravaging plague that is already painting the country in a bad light.