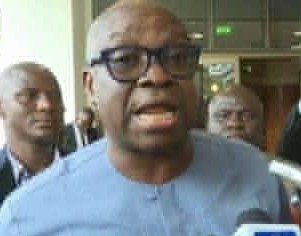 The former Governor of Ekiti State, Ayodele Fayose has condemned the statement credited to the former President Olusegun Obasanjo on the death of Buruji Kashamu

Fayose said, “It is regrettable that Obasanjo could say what he said about Buruji Kashamu after his death and when he can no longer question him. Why didn’t he say that when Kashamu was alive?”

Kashamu, who also represented Ogun East Senatorial District between 2015 and 2019 at the National Assembly, will be buried on Sunday [today] in accordance with Islamic rites at his Ijebu-Igbo hometown.

The lawmaker had faced extradition to the United States for alleged drug trafficking until his death.

But in a message titled, ‘Letter of condolence,’ addressed to Ogun State Governor Dapo Abiodun, Obasanjo, who condoled with the family of the deceased and the state as a whole, also alleged that Kashamu used the instruments of law and politics to evade justice.

“The life and history of the departed have lessons for those of us on this side of the veil.

“Senator Esho Jinadu (Buruji Kashamu) in his lifetime used the manoeuvre of law and politics to escape from facing justice on alleged criminal offence in Nigeria and outside Nigeria.

“But no legal, political, cultural, social or even medical manoeuver could stop the cold hand of death when the creator of all of us decides that the time is up,” the former military head of state said, while praying that Allah forgive Kashamu’s sins.