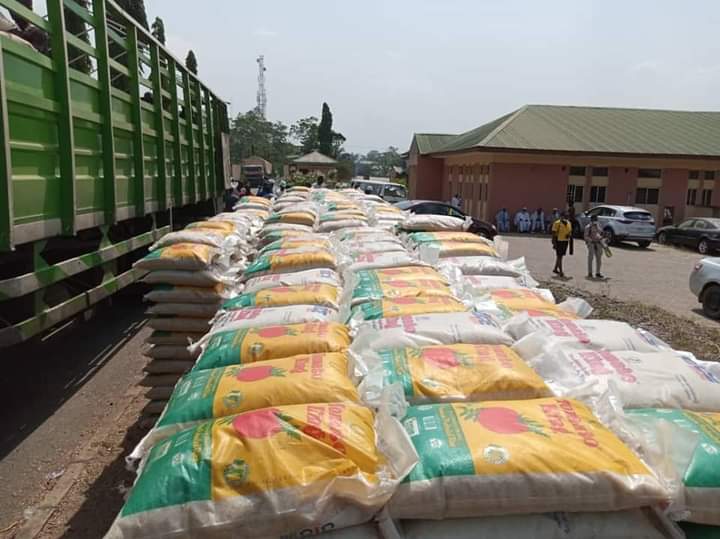 Six Thousand and Two Hundred (6, 200) bags of 10kg CACOVID rice were on Monday distributed by the Osun Government to the members of Muslim and Christian Communities in the State.

The distribution was in continuation of the distribution the over 40,000 10kg bags of rice donated to the State by the Private Sector Coalition Against Covid-19 (CACOVID) as part of efforts to cushion the effect of the global Coronavirus pandemic.

This is just as the State government said that it has followed the equitable distribution template to ensure that every segment of the population benefits from the gesture.

Receiving the stimulus package at the Government Secretariat, Osogbo, the leadership of the State Muslim and Christian Communities eulogised the State government for taking the struggle of life-supporting programmes to the grassroots through the religious leaders.

The Assistant Secretary, Osun Chapter of the Christian Association of Nigeria (CAN), Rev. Clement Fayemi, commended the Administration of Governor Oyetola for taking the welfare and well-being of the citizens as his priority.

Fayemi who described the gesture as timely and rewarding, noted that the initiative would go a long way to meet the most critical need of the people, particularly the vulnerable at the grassroots.

He applauded the style of distribution adopted by the State, which according to him had facilitated the inclusion and incorporation of religious groups in the mode of distribution of the palliative.

“First of all, I must commend the Osun Government through the leadership of CACOVID for bringing this succour to our people at this critical time.

“We are very appreciative of this gesture and we do hope that the hands of fellowship extended would in no small measure help to meet the needs of the beneficiaries.

“We are very glad that they remembered us. God will continue to remember them.

“On behalf of the State Chairman, CAN, Bishop Ogunrinde, we are very appreciative of this noble gesture”, he added.

Also, the Mufasir of Osogbo, Alhaji Maroof Ishola, expressed profound gratitude to the donor for counting adherents of the two faiths worthy of the palliative.

Ishola also appreciated the State government for taking into cognisance the vulnerable individuals among the adherents of the both faiths.

“We are very delighted to be here today to receive the food item (rice) donated to the State by CACOVID. This is a good development for the needy as it will help to put smile to their faces.

“I am particularly glad that our people are remembered in the distribution process. I commend the State government through Governor Adegboyega Oyetola for his Administration’s resolve to guarantee the security and welfare of the citizenry.

“As we are taking this to our people, we shall ensure that it gets to them in all the Local Governments and we shall distribute it accordingly and as planned”, he added.

In his remarks, the Commissioner for Commerce, Industries, Cooperatives and Empowerment, Dr. Bode Olaonipekun, expressed satisfaction at the people’s positive feedback and applause of the government’s distribution template.

Olaonipekun said the government’s distribution template which was designed to accommodate every segment of the population, particularly the vulnerable groups, had helped to evaluate the level of reach since the commencement of the distribution.

“The template we adopted gives room for proper monitoring and evaluation of the exercise and this has really helped us to evaluate the strength of the distribution so far.

“As you all know, the distribution is still ongoing. We distribute on receipt, and this technique has been the driving force through which we reach out massively to the target beneficiaries of the rice component of the CACOVID palliative.

“We shall continue to do this until the last bag is released”, he stated.