The donation was made known today at the State Secretariat as part of the objectives of the Foundation to reach out to the less privileged, government agencies, MDAs, indigents and others in its bid to contribute and play a pivotal role towards nation building.

Motunrayo Omolara Ajadi who spoke on behalf of the founder of the Foundation, Ramata Agberemi Dabo while delivering the items today to the Ministry of Health as received by the Commissioner of Health, Dr. Bashir Bello and members of his staff gave the background and historical records of the Foundation as thus:

In her words, “Let me go back to the memory lane and give a brief historical background and track records of the Foundation. The Baby Blue Angels Foundation was initially established in the United States of America by our noble, soft-spoken and kind-hearted founder, Ramata Agberemi Dabo, with the main aim of affecting lives positively both in Nigeria and in the diaspora.

“The foundation was launched in Nigeria on the 23rd of December, 2019. It is amazing to know that before we were officially launched, we had already hit the ground running by reaching out to schools, hospitals, the less privileged within and outside Ibadan metropolis in our own little way.”

She further highlighted some of the past achievements and the vision of the Foundation. She said, on the eve of the official launching, they were able to donate an optimal hearing aids to the deaf and dumb unit of the Methodist Grammar School, Bodija, Ibadan and also distributed some gift items to the widows, aged, persons with disabilities and the less privileged individuals.

She was further quoted as saying, “on the 25th of December, 2019 which marked the Christmas day was another eventful day as Baby Blue Angels Foundation team visited hospital, specifically, Adeoyo Maternity State Hospital to donate gifts and money to mothers who gave birth on that day, as well as visiting the less privileged, orphanage homes and market women to donate gifts in order to bring succour to them so as to ensure that the festive period was glamorous for them. We also ensured that they maintained good hygiene by engaging them in health talks on health related issues while also stressing the need for lactating mothers to remain healthy and strong”.

She said, ‘in addendum to the health talks, they distributed quite a number of vitamin supplements to them immediately.” 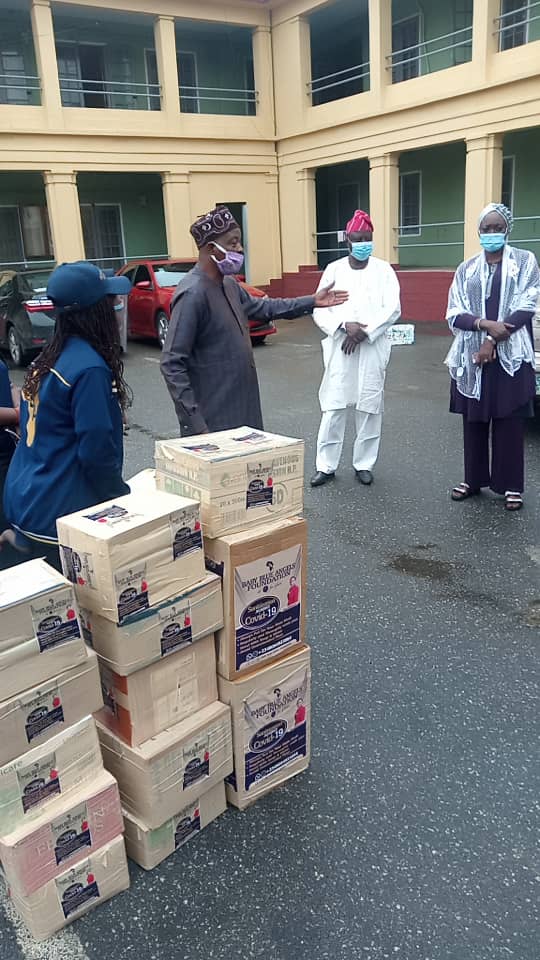 The account of the past activities of the foundation further reads: “on the 14th of February, 2020 which happened to be another memorable day of celebrating love, the Foundation out of the love for social service and service to humanity donated 32 inches LG television to motherless home in Ibadan and alot of food items were also distributed to several households in commemoration of the significance of the day and also reached out to the motherless homes, Agodi Correctional Centre with alot of gifts such as towels, toiletries and personal items most especially for female inmates”.

She disclosed further that “In March, during the partial lockdown occasioned by the spread of COVID-19, alot of palliative measures were given to widows, adults and less privileged people in the outskirt of Ibadan and that they talked to them on the need to take care of their health while also stressing the importance of taking multivitamin to boost their immune system. She averred that, cash gifts were also distributed to them to buy the required vitamin thereafter.

Omolara, while speaking further, said, In April, the second batch of palliatives were distributed which included gloves and sanitizers to primary health centers and that on 13th of July, 2020 which was the second week of resumption day for pupils/students in terminal classes in Oyo State, Baby Blue Angels Foundation team presented tap-fitted buckets and sanitizers to Oyo State government through the Ministry of Education so as to contain the spread of Coronavirus.

She crowned her remark by saying that the above highlighted historical records of the achievements of the Baby Blue Angels Foundation were few out of many they have done in Oyo State.

She likened the decision to donate 500 alcohol-based Sanitizers and 1500 surgical masks to the Ministry of Health as an effort in complementing the efforts of the state government towards containing the spread of the pandemic and stressed the need for solidarity and collective efforts to flatten the curve of the disease. She however commends all stakeholders from the health practitioners to government agencies and the security agencies for their doggedness and commitment to ensuring the safety of all.

The Commissioner of Health, Dr. Bashir Bello while commending the kind gesture shown by the Baby Blue Angels Foundation thanked them for showing solidarity at this trying time and charged them not to relent in their task of service to humanity.